How Middendorp is plotting the cup downfall of Orlando Pirates 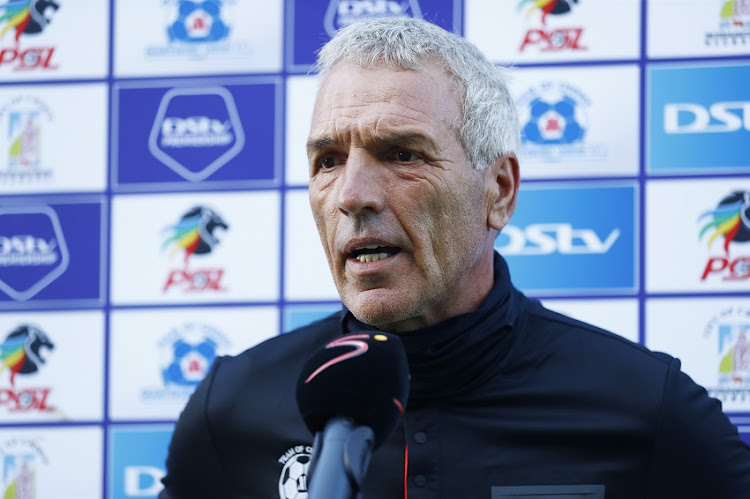 Maritzburg United coach Ernst Middendorp wants his players to maintain a high intensity for the duration of their Nedbank Cup last-16 match against Orlando Pirates at Harry Gwala Stadium on Saturday.

United go into encounter on the back of a poor run of results in the league after four consecutive losses but the German mentor has urged his charges to stand up and be counted.

“We must target ourselves more in terms of being consistent for more than 90 minutes‚” he said.

“We are not capable of keeping the intensity for a certain number of minutes. Every game is important and we have found a very clear structure the next game‚ which is the most important one.

“We have close to 15 games in front of us in the coming months and we must handle them properly. We are fully focused on Pirates on Saturday and we will do everything to qualify for the next round. There is always pressure‚ everybody knows.

“Without a doubt this is definitely a draw that we are aware of because it is against one of the strongest teams you could play. We are preparing ourselves adequately and we recently had the experience of playing against Pirates in the league.

“It was a dominant first half by Pirates and a more-than balanced second half where we contributed despite not having been able to score a goal. We ended up losing the game 1-0 and that was painful.”

Middendorp said there have been some improvements since he took over at the struggling club.

“If a team at the beginning of the season has played six games and not picked up a point‚ that says something. When I arrived‚ we had a clear approach and a little bit of a run of collecting points but if the team goes into a certain movement‚ behaviour or attitude again‚ then you definitely have to do something.

“We must identify the inner structure and look what is possible and what the reasons are for this inconsistency. We had a balanced second half against Pirates with a lot of changes and I am asking for better attitude and discipline.

“We had a good 55 minutes in the game against Golden Arrows and in the match against Swallows we had a good 40 minutes‚ which was good before we conceded.

“There is a certain concern already since December that we have to do something. We had to make changes and in the last four to five weeks we have done that.

“When I came it was zero points after six games and I made it clear immediately at that time that this is the project that will not be finalised in January or February or March.

“I repeated this in January when we picked up some points that it doesn’t mean anything. I said this is a project that will be finished in May and I have repeated this consistently.”