Hunt voices his feelings after Chiefs' blunder: 'But then again we make that unbelievable‚ stupid error' 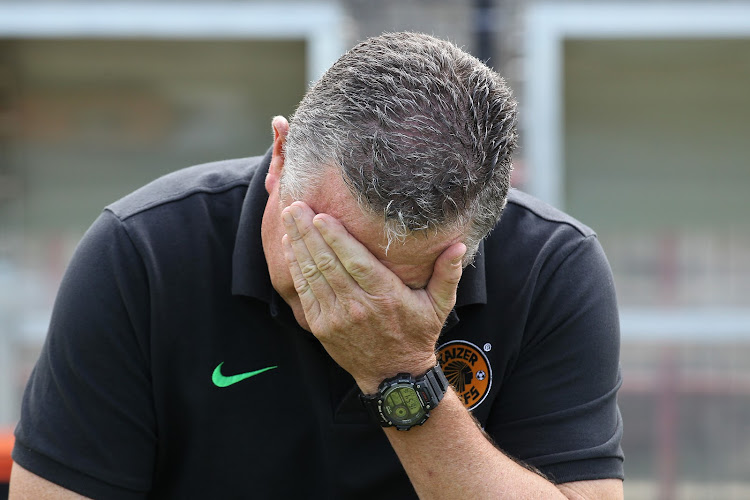 Gavin Hunt rued an “unbelievable‚ stupid error” conceding the penalty‚ but took positives from a much-improved performance from his team drawing 1-1 in their DStv Premiership match-up against SuperSport United on Saturday.

On performance and balance of chances Chiefs deserved more than a point at FNB Stadium‚ perhaps a flaw being an overly-conservative approach coming back from the break 1-0 up and attempting to consolidate playing deep.

In this period Anthony Akumu tugged Thamsanqa Gabuza down‚ and Bradley Grobler equalised from the spot in the 67th minute‚ cancelling out Reeve Frosler’s fine 29th-minute strike that came in a dominant first half to Chiefs.

At 1-1 Chiefs played again‚ but could not profit from a string of chances.

“I thought we were good – we should have won the game. But then again we make that unbelievable‚ stupid error‚ pulling the guy in the box and we give the penalty away‚” Hunt said afterwards.

“But we should have won by a comfortable score. We all know that‚ if you watch football. But every week we have chances and we don’t score.

“And then you’re conceding. We had one chance again‚ and then you concede.”

Chiefs remain without a win in six matches but Hunt took encouragement from a much-improved performance from Wednesday’s 2-1 defeat to AmaZulu at FNB‚ as ninth-placed Amakhosi outplayed a SuperSport in second place.

“It was positive‚ to come back from where we’ve been‚ a bit‚ and show a good mentality‚” Chiefs’ coach said.

“ ... It was a difficult game and they’re top of the league. We played well – the first half very good.

“I mean some of the chances and the movements were very good. But‚ you know‚ it’s all very well playing well‚ but we need points. And obviously we didn’t get them.

“I thought Bernard Parker was man-of-the-match – I thought he was fantastic. I played him in centre-midfield because we don’t really have [players available there].

Willard Katsande went to the stands with his arm in a sling.

“Every game we’re taking off players. It’s been like that most of the season. I can’t make a tactical change‚ I’ve got to change to try and plug holes‚” Hunt said.

Chiefs‚ who had their game last weekend in Morocco postponed because that country’s authorities would not grant visas over Covid-19 concerns‚ open their Caf Champions League Group C campaign against Guinea’s Horoya at FNB on Tuesday night.