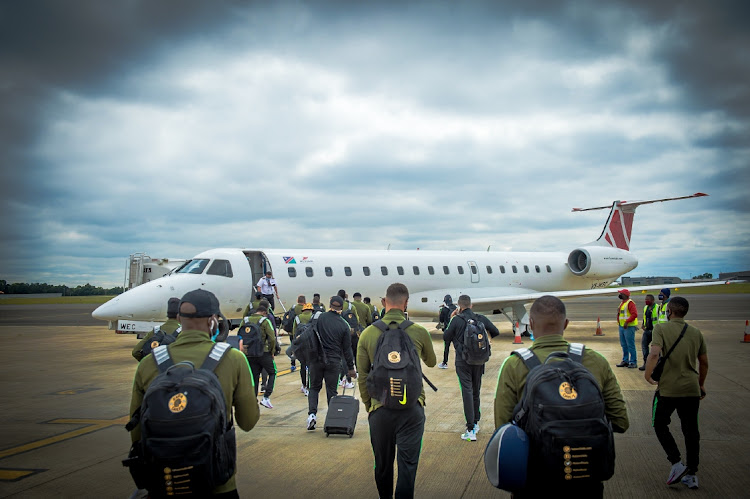 Kaizer Chiefs players, seen here travelling to Angola for their previous CAF Champions League tie, had to abandon plans to fly to Morocco as they could not secure visas / Kaizer Chiefs.
Image: Kaizer Chiefs

Kaizer Chiefs have written to the Confederation of African Football (Caf) expressing their concern at meeting a rescheduled Caf Champions League match against Wydad Casablanca in Egypt as soon as on Friday due to “visa challenges and travel logistics”.

Chiefs‚ in a statement on Tuesday‚ responded to a letter sent to them by Caf in which‚ the club says‚ it was suggested the postponed match take place “on Friday‚ February 19 at Al Salam Stadium in Cairo‚ Egypt”.

The Soweto club expressed their concern in obtaining visas to travel to Egypt – which take seven working days to obtain – in the three days before that suggested new date‚ and organising flight logistics in time.

Chiefs were originally scheduled to meet Wydad in their opening Group C match in Casablanca on Saturday‚ but were denied visas by the Moroccan authorities‚ who cited health concerns regarding high numbers of Covid-19 in South Africa.

The Royal Moroccan Football Association (RMFF) asked Caf to postpone Saturday's clash or move it to another country.

Chiefs’ statement read: “Kaizer Chiefs finally received communication from Caf via Safa [the SA Football Association] on Monday afternoon in relation to the Champions League match between Wydad Athletic and Kaizer Chiefs that did not take place as scheduled on Saturday‚ February 13 in Casablanca due to Chiefs not being issued with visas to enter Morocco.

“The emailed letter received suggests that the game between the two teams be replayed on Friday‚ 19 February at Al Salam Stadium in Cairo‚ Egypt.

“Chiefs have since responded to the letter‚ citing a few impediments that will hinder us from honouring the proposed new fixture date‚ which is in three days’ time.

“The two main reasons are visa challenges and travel logistics. Given the three days’ notice to play the match‚ the club will still face the similar challenges from the Egyptian embassy because it takes a minimum of seven working days to get approval for visas that will enable us to travel to Egypt. Securing flights at this late hour will also pose a challenge given that some airlines are not operational due to Covid-19 restrictions.

“Based on the above‚ this may have a negative impact on the Champions League game against Horoya AC scheduled for Tuesday‚ February 23‚ 2021.

“The club then proposed that the game be played at a later stage‚ as this will enable us to honour all the Champions League games on February 23 and March 5. We will communicate once CAF have reverted with a suitable date for all involved.”

The cancellation of the trip to Morocco would have come at a huge financial cost to Chiefs. The Naturena club had to cancel their flights‚ accommodation and other logistics-related expenditure.