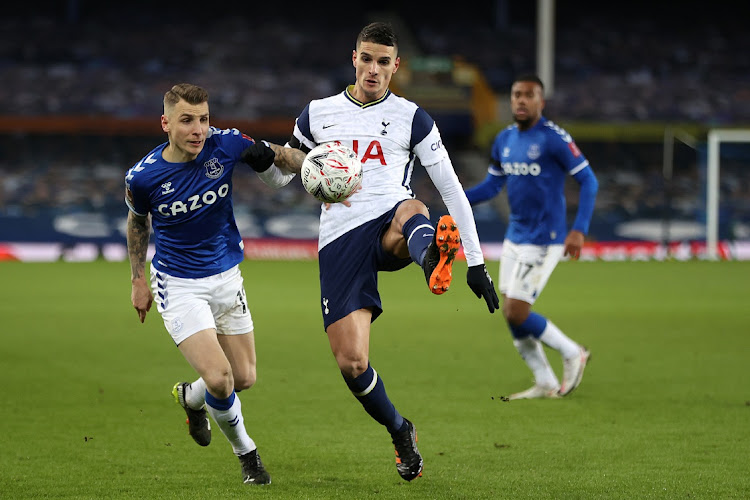 Erik Lamela of Tottenham Hotspur battles for possession with Lucas Digne of Everton during The Emirates FA Cup Fifth Round match between Everton and Tottenham Hotspur at Goodison Park on February 10, 2021 in Liverpool, England.
Image: Clive Brunskill/Getty Images

Liverpool - Jose Mourinho must be scratching his head at how to solve the problem that is Tottenham Hotspur after his side bowed out of the FA Cup in a nine-goal thriller at Everton on Wednesday.

The trophy-laden Portuguese manager has watched his side score with abandon at times this season and at other times bore the fans to sleep with some tepid displays.

They got five away at Southampton and six at Manchester United early in the Premier League campaign, then played out a 3-3 draw with West Ham United having led 3-0.

Since beating Manchester City with a counter-attacking masterclass in November, a result that sent Totteham top of the league, the fun has stopped.

While Harry Kane started on the bench against Everton, Mourinho again sent out a team to attack and they responded.

Davinson Sanchez scored twice, Lamela was also on target and Kane came off the bench to make it 4-4 and send the tie into extra time only for Bernard to win it for Everton.

But Tottenham's defending was appalling at times - they conceded three goals in seven minutes before halftime - and Mourinho will surely have to revert to his safety-first mode for tomorrow's trip to a rampant Manchester City.

"When you score four goals, you have to win. The way we played, we should win comfortably," Mourinho said.

"Attacking football only wins matches when you don't make more defensive mistakes than what you create.

"We were brave, we create, we were the best team while winning 1-0. But in five minutes it was pom-pom-pom, mistake-mistake-mistake, goal-goal-goal. You fight back, go again, but more mistakes. You fight back again. That was the mouse and the cat. The mouse was our defensive mistake, and the cat was us trying to compensate that by playing well."

Tottenham Hotspur manager Jose Mourinho plans to buy a ticket for the raffle organised by Marine ahead of Sunday's FA Cup third round clash but said ...
Sport
1 year ago
Next Article