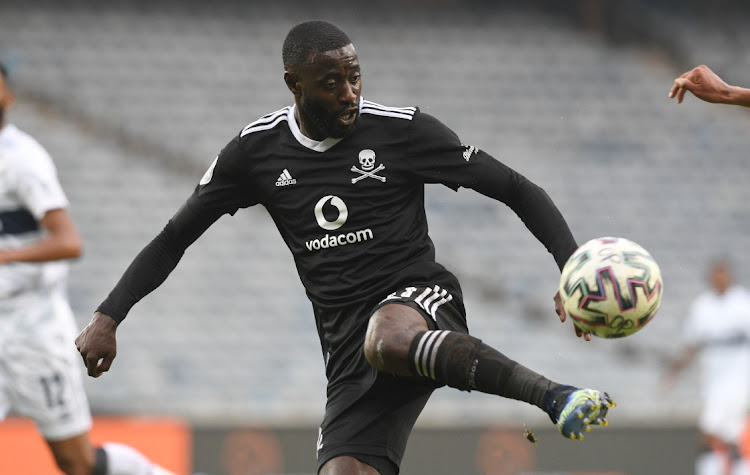 Deon Hotto during the DStv Premiership 2020/21 match between Orlando Pirates and Cape Town City on the 09 February 2020 at Orlando Stadium.
Image: Sydney Mahlangu/BackpagePix

Orlando Pirates coach Josef Zinnbauer had plenty of reasons to celebrate after his side got their DStv Premiership campaign back on track with a 2-0 win over Cape Town City on Tuesday. Bucs kept a clean sheet against one of the most attacking teams in the league.

Deon Hotto and Vincent Pule struck in the first five minutes at Orlando Stadium to secure Bucs a win that moved them up to fourth in the standings.

Zinnbauer was happy that they won the league game to bounce back from their defeat at Golden Arrows last week. Also, his son is recovering from a car accident that happened in November in Germany. "I am happy that my son is still alive, but we are asking for more prayers," a jovial Zinnbauer said.

Bucs' next mission is in the CAF Confederation Cup, where they meet  Botswana's Jwaneng Galaxy in the playoffs stage to determine the 16 teams to participate in the group stage of the competition.

Jwaneng will host the first leg in Gaborone on Sunday at 3pm.

Pirates's low-scoring rate still gives the 50-year-old mentor the blues, despite the double against City. He has expressed the wish for his team to score more goals, not only to win games but to improve their goal difference, which is currently sitting at just five after 17 matches.

"We are making progress; that is what we want. We did well in defence and scored two goals. But we could have won this game by a bigger margin. We let them off the hook. We deserved to win the game," said a relieved Zinnbauer.

He has a point; his team missed several chances in their 14 shots at goal against the Citizens. Zinnbauer was however satisfied with the general performance by his team on the day.

Orlando Pirates earned what seemed a crucial and relatively convincing 2-0 win against Cape Town City at Orlando Stadium on Tuesday evening to remain ...
Sport
11 months ago

Thabo Nodada says he wants to repay the faith Cape Town City have shown in him after he signed a new three-year deal yesterday.
Sport
11 months ago
Next Article