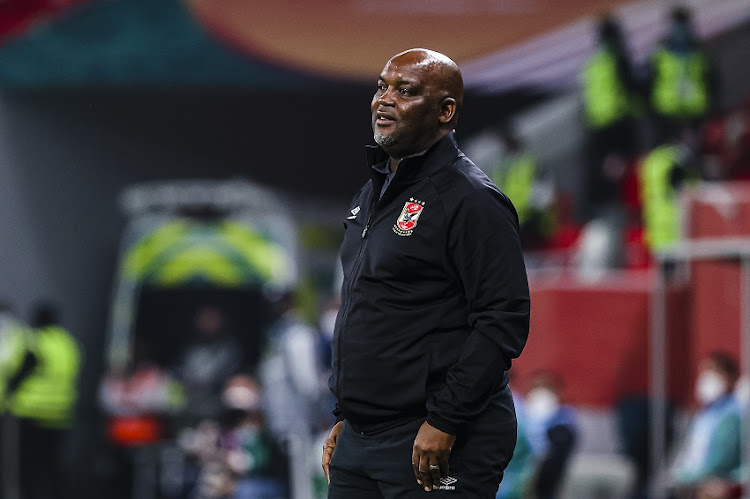 South African coach Pitso Mosimane is under increasing pressure from millions of passionate Al Ahly supporters to claim the bronze medal when the Egyptian side faces Brazilian club SE Palmeiras in the play-off for third place in the Fifa Club World Cup on Thursday.

The Red Devils failed to secure a maiden appearance in the final following a narrow 2-0 loss to European champions Bayern Munich on Monday in a match where they earned plaudits for holding their own against visibly superior opponents But the pressure is now on Mosimane to at least match the class of 2006 that claimed third place and was inspired by tournament top scorer Mohamed Aboutrika.

A section of the fans and some club legends have questioned Mosimane’s tactics and he can silence them with a bronze medal on Thursday.

Egyptian journalist Omar Elbanouby of Akhbar Elyom newspaper said the Al Ahly fans expected the club to beat Bayern and progress to the final. They have the same belief as Al Ahly prepare to face Palmeiras.

“Al Ahly fans always trust the team‚ even against Bayern. The majority of the fans said 'yes we can beat Bayern' and this time they really trust that Ahly will win the game against Palmeiras and the bronze medal‚” said Elbanouby.

“I think that the team has a good chance to win the match against Palmeiras and win the bronze medal of Fifa Club World Cup‚ even though Fifa have prevented two important players from the game in Mahmoud Abdel Soliman and Hussein El Shahat [from playing against Palmeiras].

“But we have more and more players like Mohamed Sherif‚ Taher Mohamed‚ Walter Bwalya and Marwan Mohsen. Fans trust coach Mosimane and it goes without saying that him and the technical team have studied Palmeiras and they have prepared the team well. In my opinion‚ Palmeiras is a good team with a good coach‚ Abel Ferreira‚ but Al Ahly can win the game.”

Fifa announced on Wednesday that El Shahaat and Soliman have been banned from participating in the Palmeiras game after television cameras captured them shaking hands with the Ahly supporters in the stands‚ breaking protocols. Aboutrika was also in the stands.

After the defeat to Bayern this week‚ Mosimane said they would correct their mistakes and assess the strong points and weaknesses of the Brazilian opponents.

"Even in defeat‚ there are good things that happened and the third is to assess the strengths and weaknesses of the opponents.

"Maybe we will give other guys an opportunity‚ but you must be careful because sometimes it’s not about giving other guys a chance to play. It’s important to win the match.

"We get the balance of giving other guys a chance‚ but don’t forget to win the match.”