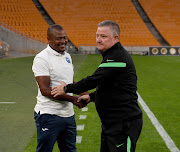 Bay booked their slot in the next round of the Ke Yona cup via a 2-1 triumph over Kaizer Chiefs at FNB Stadium at the weekend. Thabani Dube and Siyabonga Vilane were on target for the Natal Rich Boyz, while Leonardo Castro scored for the hosts.

Beating Chiefs in their backyard has since given the promotion-chasing Bay instant hype and spotlight, with many eager to see how the KwaZulu-Natal-based side fare in the last 16.

Even so, Dladla has downplayed the importance of the cup, emphasising their primary target is to gain promotion to the Premiership. Bay are currently second on the GladAfrica Championship log, on 20 points, level with leaders Sekhukhune United, who are ahead by virtue of a better goal ratio after 12 outings.

“The cup is not important to us. The primary goal is promotion. I am frustrated that I have spent six years in this league [the second tier] without winning anything. So, my focus is on the league,’’ Dladla revealed.

The 41-year-old Dladla, who operated as a striker playing for AmaZulu in his heyday, emphasised they used the game against Chiefs to just test their resoluteness.

“We wanted to see the real strength of our team. I told the boys that we’re doing well in the league. We approached this game as a league game,’’ noted Dladla.

“In GladAfrica we have the Under-23 rule [that says clubs must have a minimum of five U-23 players on the team sheet and at least two of those on the field at all times]  and I always have more U-23s on the bench, so that even when we make changes we play them. Even today [on Sunday] I did the same.’’

Dladla also insinuated going forward he may be tempted to use an under-strength team in the cup, saving his trusted troops for the league action.

“Going forward we might not use the same team [they used versus Chiefs]. For me it was important to give them this game because they are doing well in the league. I gave them this game as a reward,’’ said the Bay mentor.