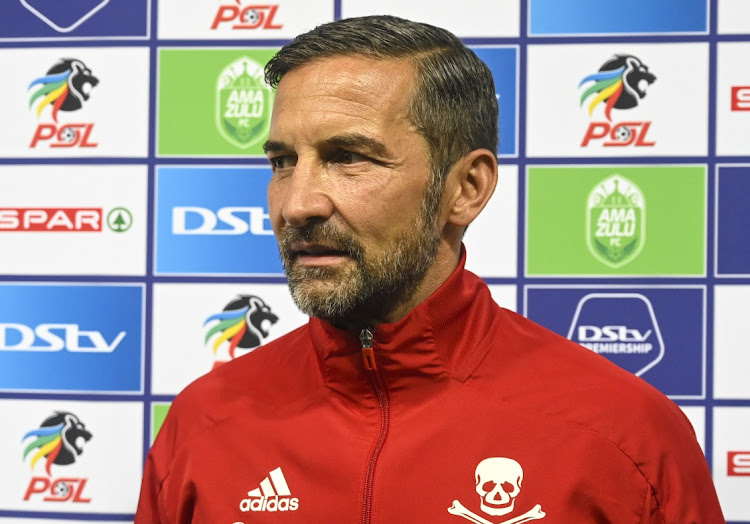 Despite their progression to the Nedbank Cup last 16, Orlando Pirates coach Josef Zinnbauer is not satisfied with his team's performance and demands an improvement.

The two-time Ke Yona! winners registered a slender 1-0 victory over GladAfrica Championship side Uthongathi at the Orlando Stadium at the weekend. Off-form striker Gabadinho Mhango scored midway through the second half in a close contest with a team from the lower division.

But they must bring their A-game in their next DStv Premiership assignment when they host free-scoring Cape Town City tomorrow (5pm) at the same venue. Clearly Bucs have goalscoring problems, and injuries to Tshegofatso Mabasa and Zakhele Lepasa are not helping. And there's new injury upfront involving Mhango, Zinnbauer has revealed. He is however happy to see Mhango get on the scoresheet, and hopes his top striker last season will rediscover his goalscoring exploits.

“We have to work with what we have. I am happy that Mhango scored. But he sustained an injury and I hope he is available for the Cape Town City game. I hope that the [other] injured players return,” said Zinnbauer.

“It was not a good game [against Uthongathi] for us. We created opportunities but lacked the killer instinct. We should have scored an early goal to be able to breathe. But we take the win and progress to the next round. The win is important for us but I am not happy with the performance.”

Another injury concern is over goalkeeper Richard Ofori, who was replaced in the second half with Siyabonga Mpontshane, who had not played a game for almost a year.

Zinnbauer said he wanted to save the Ghana international goalkeeper for the City game as he had a muscle issue.

“Ofori had a muscle problem and wanted to save him. He complained about the pain and we had to replace him to avoid the injury getting worse,” Zinnbauer said.

He said Uthongathi made them sweat for the win and had nothing to lose and everything to gain.

“They were full of energy and ran all over the pitch. It was not an easy win.”

Uthongathi coach Pitso Dladla said he was proud of his players' efforts but needs to work on their finishing.

“I am proud of my players as they gave Pirates a run for their money,” said Dladla.