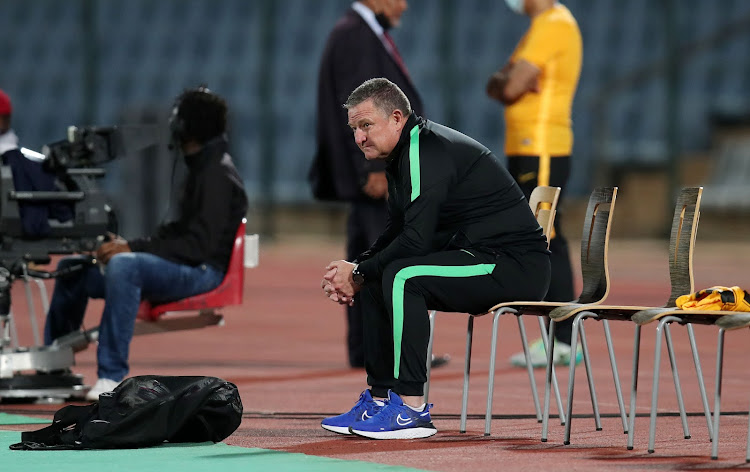 Gavin Hunt has said the defeat against Richards Bay was the worst result of his 27-year career as a top flight coach.
Image: Muzi Ntombela/BackpagePix

Kaizer Chiefs coach Gavin Hunt has offered a sobering assessment of his team by declaring that they need a lot of work following the 2-1 defeat to GladAfrica Championship side Richards Bay.

Richards Bay scored a late goal to dump Chiefs out of the Nedbank Cup and this means Amakhosi will have to win the league to finally break the near six years trophy drought.

Hunt‚ who admitted that this defeat has embarrassed him and is the biggest of his largely successful 27 years as a coach‚ said his toughest job now is to pick up the players.

“There are a couple of ways you can handle these things and hopefully they do care because I haven’t spoken to then yet‚” said Hunt shortly after the match.

"We need more fight‚ we need better attitude when we go out there and that is something that it’s very difficult to change.

"This is the biggest defeat I have faced in 27 years‚ we need a lot of work.

“We conceded right at the death which is obviously disappointing. I am disappointed‚ actually I am embarrassed‚ but we can’t change the results and congratulations to them.”

Hunt went on to say that he takes responsibility for the defeat.

“We have to try and use the squad that we have and there have been a few players that got a big chance today.

"Obviously the result didn’t go our way but there was a lot more from the senior players who came in and had to do better and they didn’t do better.

"All round I have to look‚ obviously I select the team and take responsibility.

“There were one or two players that we brought on but didn’t live up to what we expected.

"We changed the shape and when you change the shape you want to push a little bit more and we did.

"In the second half there were so many opportunities in and around the box and the final pass of the ball let us down.

“It is more about the technique of the actual execution. Leonardo Castro missed the one header under the cross-bar and that was the biggest miss of the day.

"That’s more about the execution of the technique."

Hunt added that the red card to Siphosake Ntiya-Ntiya set them back.

“From my perspective it was a foul and there is no doubt about it. You know when you are on a yellow card that you can’t make those sorts of tackles.

"It put us on the back foot but‚ be that as it may‚ even with ten players we still looked like we could score anytime.”