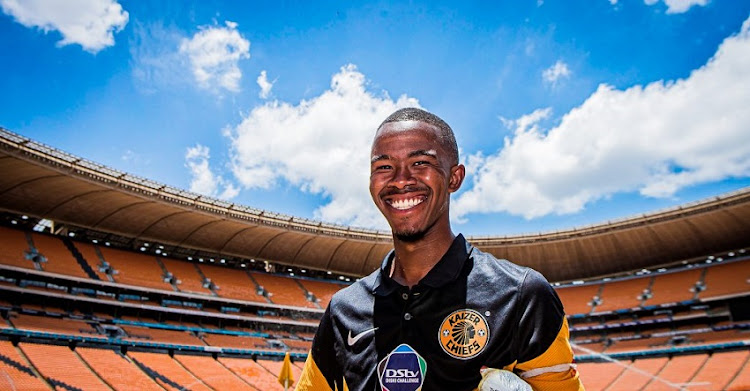 Sabelo Radebe has been drafted into the senior team after impressing coach Gavin Hunt and his technical team during a few games in the DStv Diski Challenge (DDC) before its recess.
Image: TWITTER/KAIZER CHIEFS

Kaizer Chiefs have promoted another development product‚ midfielder Sabelo Radebe‚ to their first team and coach Gavin Hunt has said he has high hopes for the 21-year-old.

Hunt said he might even give Radebe‚ nicknamed “Bibo”‚ and who turned 21 on Wednesday‚ a taste of first team football when Chiefs meet GladAfrica Championship outfit Richards Bay FC in the Nedbank Cup last-32 at FNB Stadium on Sunday.

The coach said he decided the young midfielder deserved promotion from Chiefs’ DStv Diski Challenge reserve team having watched him in just one game.

“I brought him up last week from the Diski. I saw him play once and I said‚ ‘He’s got to come to the first team’‚” Hunt said.

“I played him this week in a little friendly game. I’m going to register him and he might be in the team for the weekend.

“So‚ ja‚ he’s another one who’s come through [from the youth]‚ so we’ve got quite a few at the moment.”

Hunt added‚ referring to ex-SuperSport United and Bafana Bafana midfielder Thandani Ntshumayelo: “If he can play half as well as the ‘Bibo’ that I had at SuperSport‚ who I gave a chance to‚ he’ll be half-decent.”

Radebe joins Chiefs’ youth products whose introduction to first team football has been accelerated by a two-window Fifa transfer ban.

Nkosingiphile Ngcobo‚ Happy Mashiane‚ Darrel Matsheke and Njabulo Blom have come the fore as Amakhosi have appeared to stabilise from a dismal start with one defeat in their last six matches. Lebohang Lesako and teen Keletso Sifama have also earned valuable introductions.

Sabelo Radebe has been drafted into the senior team after impressing coach Gavin Hunt and his technical team during a few games in the DStv Diski Challenge (DDC) before its recess.

Hunt was asked if Chiefs’ situation perhaps provides an example to other clubs to put aside seasons where they prioritise rebuilding and introducing youth over results‚ when such an opportunity arises.

“If you look at the state of the market‚ not just in South Africa but anywhere in the world‚ the price of players is exorbitant‚” the coach said.

“So guys like [assistant coaches] Dillon Sheppard and Arthur Zwane coming in that’s obviously the focus‚ but that’s the long-term project – to try and get players to what we are looking for‚ and get a system in place where you are looking at our youth.

“And sometimes when you’re in something like our position where you’re forced to do it you discover things that were right in front of you that you never even realised you had.

“There’s a lot of improvement still to be done in these players‚ but with young players there’s always improvement.

“ ... And now they’ve got to get to the next level. And you keep pushing the boundaries.

“And maybe I’m to blame as well‚ because maybe sometimes I’m trying to put square pegs in round holes and asking them to do things that they’re not good at.

“But you’ve got to look‚ and the only way to see is sometimes by trial and error. And sometimes the errors are coming in big games.

“But‚ ja‚ we need more of this. You’re not going to fill a team with a whole youth development. But there are certainly players there who can go to the next level‚ and they will be given a chance.”

Chiefs have right-back Ramahlwe Mphahlele returning from injury‚ who would undergo a fitness test on Saturday to see if he was fit for Sunday’s cup tie.