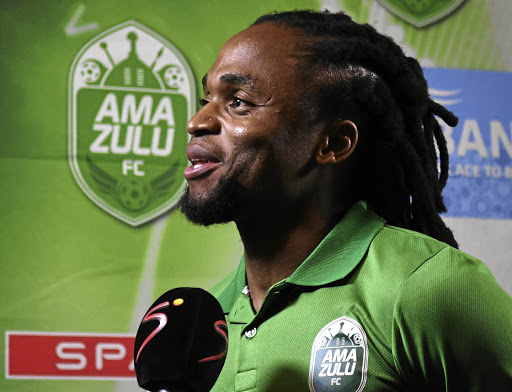 AmaZulu FC are set to release a number fringe players before the end of the current window‚ but the club’s coach Benni McCarthy declined to confirm if former Bafana Bafana midfielder Siphiwe Tshabalala will be one those.

Former Kaizer Chiefs star Tshabalala has only played seven minutes since joining AmaZulu in October‚ having spent more than a year without a club after his contract with Turkish outfit BB Erzurumspor ended in July 2019.

McCarthy was asked on Wednesday ahead of Usuthu’s last-32 Nedbank Cup clash against Lamontville Golden Arrows on Saturday to comment on Tshabalala’s future‚ but declined to make a commitment or reveal the names of the players to be released.

“I will be honest‚ I can’t reveal the list because I’ve done the list on the first week [of January]‚ but I don’t have a list with me‚” AmaZulu’s coach said.

“I was important for me to know who the players on that list are‚ but also out of respect to the players you don’t want to make it public.

“You want to keep it an internal affair. But yeah‚ I’m looking to offload players because I’ll say working with the big squad is just frustrating‚ it’s hard and you don’t get the best out of the players you need to get the best out of.

“You can’t be focused on everyone because the squad is so big and sometimes the quality is missed because you can’t pay attention to the details.

“So yes‚ there’s a big list of players who were asked to be released or go seek other opportunities. That is true‚ but the names I can’t disclose.”

Tshabalala was signed amid some fanfare alongside more than 10 players ahead of the start of the 2020-21 season‚ a few days after new owner Sandile Zungu had announced that he had taken over the club from previous AmaZulu boss Patrick Sokhela.

The scorer of the remarkable opening goal of the 2010 Fifa World Cup for Bafana against Mexico has only played seven minutes‚ in AmaZulu’s 2-0 loss against Arrows in a DStv Premiership fixture on December 16.

Tshabalala was an unused substitute on AmaZulu bench in the 1-1 draw against Cape Town City and 3-1 victory against Chippa United‚ a match that McCarthy watched from the stands before taking over the coaching reigns.

The midfielder has not featured for Usuthu‚ either as starting player or a substitute‚ since McCarthy arrived on the AmaZulu bench.