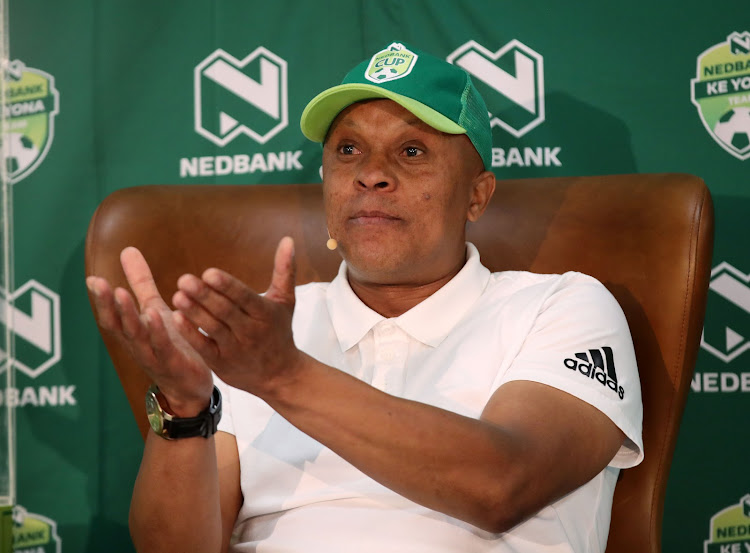 Doctor Khumalo had a brief playing stint in Argentina and has relieved memories of the South American Premiership.
Image: Samuel Shivambu/BackpagePix

Nelson Mandela told Bafana Bafana on the morning of the 1996 Africa Cup of Nations final that if they won they would give South Africa’s president the “ammunition to challenge the world”‚ midfield legend Doctor Khumalo has recalled.

In front of a multiracial‚ 90‚000 crowd at then-78‚000-capacity FNB Stadium‚ exactly 25 years ago on February 3‚ 1996‚ after a nervy opening hour Khumalo’s free-kick set up Mark Williams’s 73rd-minute opener against tough Tunisia. Two minutes later Khumalo made the intercept and pass to set up William's second for SA‚ as Bafana ran out 2-0 winners and captain Neil Tovey was presented the trophy by late President Mandela.

Khumalo recalled the influence of Mandela‚ South African supporters‚ and coach Clive Barker and his advisor Jomo Sono on lifting the team to a point where the Kaizer Chiefs legend said Bafana could not have lost‚ no matter who they played.

Mandela's inspirational words ahead of the tournament that Bafana were playing for the entire country lifted South Africa on the path to the final. He paid the team an unscheduled visit on morning of the last game at their Sunnyside Park Hotel base.

“We were in our rooms‚ some of the boys were playing table tennis‚ some sitting playing cards – and we just saw an entourage of cars‚” Khumalo told TimesLIVE.

“That was Madiba. Because it was almost pre-match team talk time. And [team manager] Glyn Binkin just came rushing in and said‚ ‘Guys‚ the president’.

“You can imagine‚ the hotel was packed‚ and he walked in and Clive received him and we went to the team talk room. He [Mandela] spoke first‚ so he could go and we could do the team tactics with the different coaches.

“And he reminded us again that we had ‘to remember that this is for the nation’‚ ‘this will be the last hurdle’‚ ‘we haven’t disappointed’ and he ‘knows we are going to make him proud and South Africans proud’.

“And also that this was how he‚ as a president‚ could be able in the international arena to say that the very same South Africa that they think‚ ‘there’s too much crime’‚ where so many things were negative‚ was the same country that lifted the best trophy in Africa. So that would have given him power‚ ammunition to challenge the world.

“So [before that] we didn’t know that through the game‚ politically we are easing certain things. But when he articulated some of the things‚ I even said to Shoes [Moshoeu]‚ ‘Wow‚ does it have to go this far?’

“And Madiba said‚ ‘Come 5pm‚ or 6pm‚ when my captain [Neil Tovey] lifts the trophy he must know that it will be history that is going to be written‚ and it’s not going to change. You would have played a role to unite the country’.

“When he left‚ everything that he had said was ringing in our minds. Each individual was saying‚ ‘We can’t let it slip‚ we have travelled this far’.”

As if that was not powerful influence enough‚ Khumalo said Barker and Sono lifted particularly the Kaizer Chiefs man’s confidence for the final. Khumalo had enjoyed a good tournament ‚ but one where his influence was less noticeable than some of his teammates. He said the Tunisians had planned for all SA’s strengths‚ but made one mistake downplaying Khumalo’s influence.

“Jomo‚ as he had for the semifinal against Ghana‚ gave a me little kick up the … to say‚ ‘I must up my game a bit’‚ he ‘knows I can do something’.

“Clive will always‚ as usual‚ put you on a pedestal in a way that you ask yourself‚ ‘This coach‚ is he sure that I’m this kind of a person that he’s describing?’

“You would get goose bumps. He would go individually‚ group‚ team. And he would always say‚ ‘Boys‚ if the machinery is not functioning well‚ we are having difficulties‚ we change our tune – let Shoes and Doc dance’.

“On the touchline‚ I would always hear him when Shoes was in possession of the ball saying‚ ‘Dance baby‚ dance Shoesy‚ come on Doc‚ dance boy‚ just put it under those legs!’

“Because they [the Tunisians] had to change. These guys analysed Bafana Bafana to the ‘T’. They closed down the late Sizwe Motaung‚ they made sure Mark Fish did not run into attack‚ and there was a guy always shadow-marking Shoes.

“But they made a mistake – because all the games I was playing‚ contributing here and there. And they never assigned someone to track me down.

“And this was where Clive said in the second half‚ ‘You need to move from the wing‚ get inside. There you will be more on the ball. When Doc is more on the ball‚ Shoes‚ you take the defender away. Let Doc be the player who makes us play’.

“Because that guy followed Shoes 100 percent. If you were to recall Shoes didn’t play much that game.

“And that’s where now‚ I decided the last 35‚ 40 minutes‚ I had been given the freedom to display‚ playing behind the strikers. And that’s when I created those goals.”

Bafana beat Cameroon 3-0 in their Group A opener‚ and Angola 1-0‚ then lost 1-0 to Egypt. They beat Algeria 2-1 in the quarterfinals‚ and tournament favourites Ghana 3-0 in the semis.