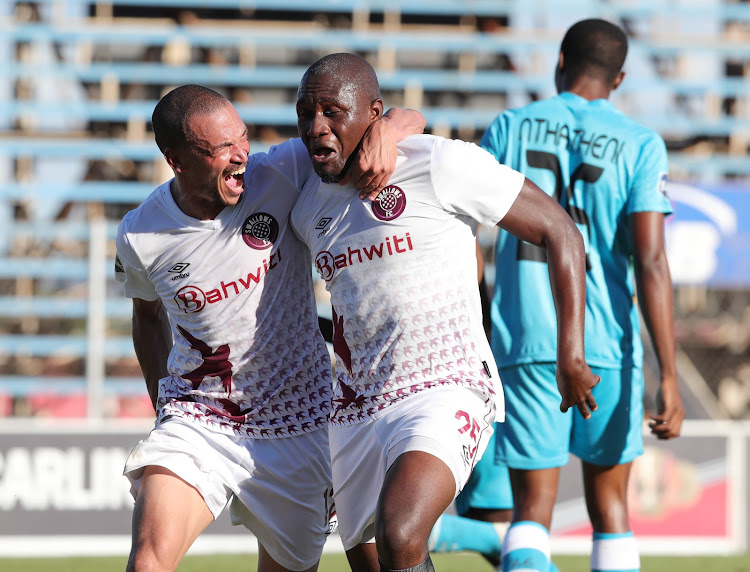 Ruzaigh Gamildien (L) celebrates with goalscorer Joseph Mhlongo (R) who scored the winning goal for Swallows FC away against Black Leopards in a DStv Premiership match at Thohoyandou Stadium in Venda on December 20 2020.
Image: Samuel Shivambu/BackpagePix

Swallows FC coach Brandon Truter has applauded his senior players for their fighting spirit in matches against their staunchest rivals recently.

The Birds displayed a tenacious attitude against title challengers Mamelodi Sundowns‚ SuperSport United and Orlando Pirates‚ snatching crucial points when many thought they were dead and buried.

“Look‚ ja‚ it’s not about me at the end of the day. I’ve so many experienced boys around me‚” said Truter.

“Yes some of the players are new in the team‚ but they are players who’ve won things in the past.

“They are players who’ve been there and done that‚ so giving up is not in our character and that’s what we preached.

“They want to play and they want to win all the time. The intensity of training is so high that sometimes I have to say stop it and say it’s enough now.

“It carries over in the match and that’s what you want. If you can transfer your training content onto the match‚ it is going to serve you well and we’ve seen it in so many games."

Swallows latest draw‚ their third in a row‚ was a 1-1 stalemate against SuperSport at the Lucas Moripe Stadium on Saturday where Truter's side needed Joseph Mhlongo’s 75th minute equalizer to cancel out Lucky Mohomi’s 6th minute opener for the home side.

Truter‚ whose team remains third on the DStv Premiership log and unbeaten after 14 rounds‚ said he was not worried about the latest three draws against Chippa United‚ Sundowns and SuperSport.

“So these are tough teams who’ve been there and done that. In the PSL getting a draw against teams like these is gold.”

The Swallows coach also pointed out that fatigue could also be crippling his side with six back-to-back matches played in January.

“Definitely‚ the amount of games we played in January are going take a toll on you.

“We’ve played‚ I think‚ six matches during a four-week period‚ and it’s going to take a toll. It’s going to hit the players hard and the accumulation of fatigue is immense.

“So ja‚ we’re doing alright with the draws. If we didn’t create chances it would have been worrying for me‚ but we did create and we just didn’t take them.”

Truter said his players want to win every match and he sees it in their eyes when things are not going the way they want.

“As I was greeting the players after the match [on Saturday]‚ you could see the frustration‚” he said.

“I think within our camp we’re expected to win every game‚ but we must be mindful also that we’re a newly promoted team.

“Look‚ we fancy our chances in the second round (of the league) with our home games in Dobsonville.

“So we’re hoping to get the results at Dobsonville because that’s our aim. But coming away with a draw away and scoring so late tells you about the character of the team.

“It tells you about the character that we don’t give up‚ so we’ll fight until the end.”