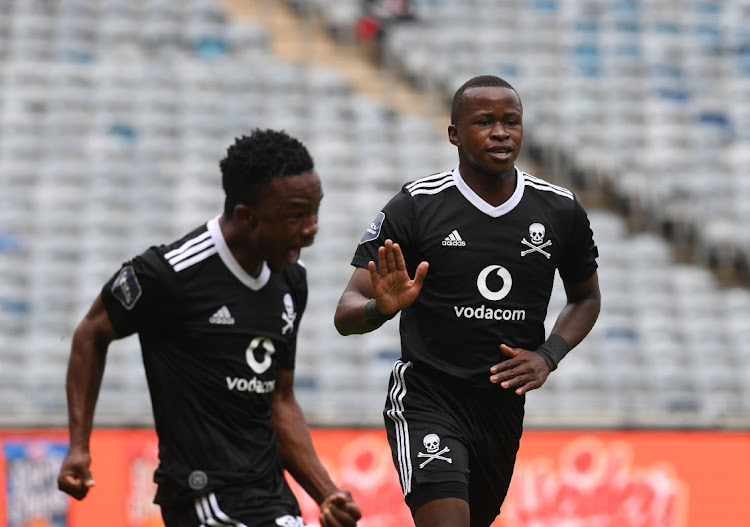 Siphesihle Ndlovu of Orlando Pirates celebrates goal with teammates during the DStv Premiership 2020/21 match between Orlando Pirates and Kaizer Chiefs on the 30 January 2020 at Orlando Stadium.
Image: Sydney Mahlangu/BackpagePix

Orlando Pirates coach Josef Zinnbauer breathed a sigh of relief after his side registered a 2-1 victory over rivals Kaizer Chiefs in their DStv Premiership encounter at the weekend.

When referee Luxolo Badi blew his final whistle to signal the end of the game at Orlando Stadium on Saturday, it felt like a weight was removed from Zinnbauer’s shoulders.

A section of the club’s supporters had called for Zinnbauer’s dismissal due to the Buccaneers’ lack of consistency in the league. But the soft-spoken Zinnbauer redeemed himself by helping Bucs claim the bragging rights in the Soweto derby.

He even dedicated the win to the supporters to show that he understands their frustrations in seven matches that they have drawn in the league.

Goals by Thembinkosi Lorch and Siphesihle Ndlovu got the job done for Bucs. But Zinnbauer has Ghanaian goalkeeper Richard Ofori to thank for saving Samir Nurković’s penalty in the second half. Chiefs rallied back with a late goal by Daniel Cardoso, but Bucs held out for the morale-boosting victory to revive their Premiership title aspirations.

The coach was happy with their defending and commended his boys for dealing with the Chiefs’ long balls.

“It was a team effort, and I think that we deserved the three points. The win is good for the supporters. We wanted the three points, and we got the job done. The derby is a special game. I am happy that we won,” said a relieved Zinnbauer.

Bucs could have had a penalty in the second half, but their plea for a spot-kick fell on deaf ears. Njabulo Blom fouled Vincent Pule in the box, but the referee continued with the play. He booked Thabang Monare, Lorch and Ben Motshwari for protesting against his decision. “We were unlucky not to get a penalty. I think it was a foul,” said Zinnbauer.

Despite yet another Soweto derby defeat, hard-to-please Kaizer Chiefs coach Gavin Hunt has taken positives from their DStv Premiership loss to ...
Sport
11 months ago

Orlando Pirates returned to winnings ways with a 2-1 DStv Premiership win over Kaizer Chiefs in the exciting Soweto derby that was played at the ...
Sport
11 months ago
Next Article