Safa to review ref's decision not to award Bucs a penalty 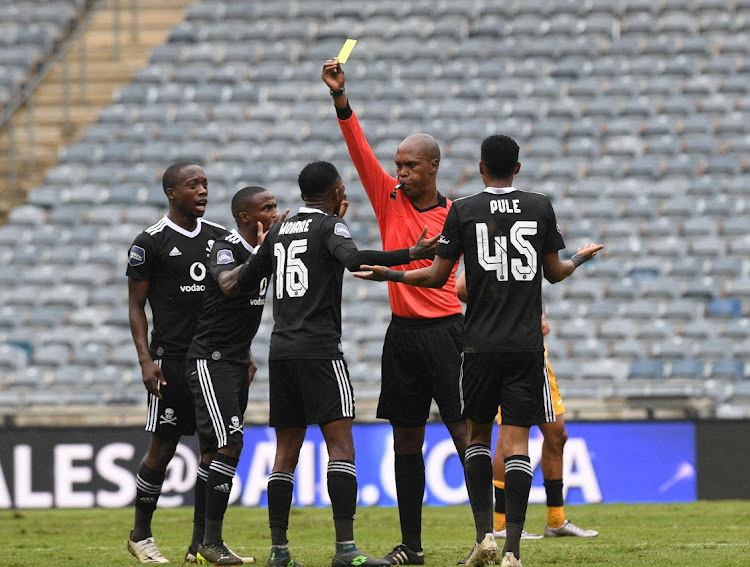 Referee Luxolo Badi could be suspended following questionable decisions during the Soweto derby between Orlando Pirates and Kaizer Chiefs at Orlando Stadium on Saturday.

Badi took centre-stage as he denied the Buccaneers what looked like a clear penalty in the second half. Attacking midfielder Vincent Pule was pulled down by Chiefs midfielder Njabulo Blom with Bucs leading 1-0.

In a dramatic end, Bucs went on to win 2-1 with goals from Thembinkosi Lorch and substitute Siphesihle Ndlovu.

Chiefs, meanwhile, missed a penalty through captain Samir Nurkovic, before Daniel Cardoso pulled a goal back in the 85th minute.

But the talking point of the match was the penalty appeal for Pirates in the 70th minute that was turned down by Badi, even though replays suggested he may have erred.

The referee then cautioned Lorch, Thabang Monare and Ben Motshwari after the Pirates players had mobbed him, remonstrating furiously.

Recent referees' blunders have seen current ref of the season Jelly Chavani, suspended for four weeks after his failure to award Pirates a penalty two weeks ago, and expectations are that Badi could also follow suit should Safa decide to act on his mistake from Saturday.

When asked for a comment on the recent performance of referees, the chairperson of the referees' committee at Safa, Natasha Tsichlas, said they would wait for the review committee to sit today and wait for the outcome.

“We will sit today to review all the weekend matches and analyse everything,” Tsichlas told Sowetan yesterday. “We are going to get a report, and we will put it in the press thereafter, as we always do when there is a case to answer to.

“The technical team has a big TV screen where they start analysing, something akin to VAR, but even more advanced because they are doing it slowly. So they are the ones who will tell us what happened there (with the Badi incident)."

Alongside Chavani, assistant referee Andile Mncwango has also been banned for 16 weeks after he incorrectly flagged Bloemfontein Celtic striker Sera Motebang offside upon scoring against Mamelodi Sundowns a fortnight ago. That match ended goalless, and referee Thokozani Mkhize has also been slapped with a four-week sanction.

There was another questionable decision in a fixture between SuperSport United and Swallows FC on Saturday during their 1-1 draw at Lucas Moripe Stadium.

But replays suggested there was no foul, and the goal should have been allowed.

Orlando Pirates coach Josef Zinnbauer breathed a sigh of relief after his side registered a 2-1 victory over rivals Kaizer Chiefs in their DStv ...
Sport
10 months ago

Despite yet another Soweto derby defeat, hard-to-please Kaizer Chiefs coach Gavin Hunt has taken positives from their DStv Premiership loss to ...
Sport
10 months ago
Next Article