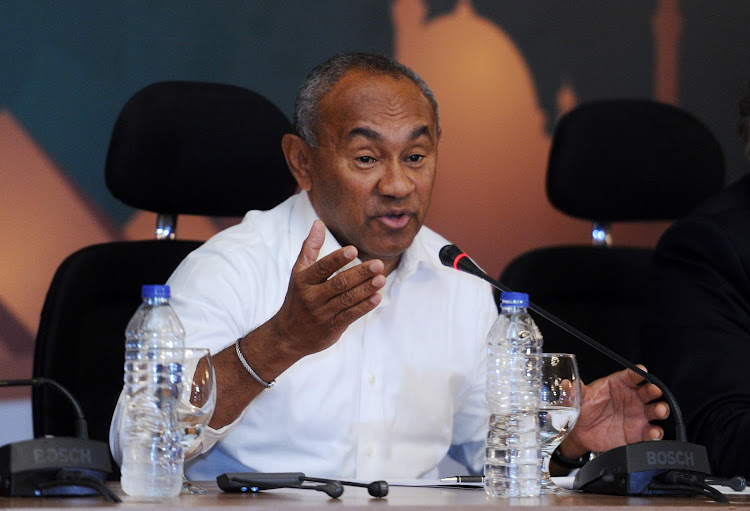 Ahmad Ahmad has been temporarily reinstated to the presidency of the Confederation of African Football by the Court of Arbitration for Sport. File photo
Image: Ryan Wilkisky/BackpagePix

The Court of Arbitration for Sport (Cas) has dramatically reinstated Ahmad Ahmad as president of the Confederation of African Football temporarily pending an appeal against a five-year ban from the sport.

Ahmad has taken an appeal against his ban to the international sporting court — the highest body in sports judicial decisions — in Lausanne. Cas released a statement on Friday evening saying the appeal will be heard on March 2, 10 days before the Caf presidential election, and for positions on the Fifa council, on March 12.

Cas reinstated Ahmad due to “a risk of irreparable harm for Mr Ahmad if the disciplinary sanction is maintained during the period prior to the CAF elections”.

However the court rejected the Malagasy’s bid “seeking that an order be imposed preventing Fifa from taking any decision aimed at preventing Mr Ahmad from participating in” the Caf presidential elections.

So Ahmad’s participation in the elections is dependant solely on whether he succeeds in overturning the November decision of the Fifa ethics committee to ban him from football for five years having been found to have breached several of the global ruling body’s ethics codes.

The four candidates vying for the Caf presidency on March 12, including SA’s Patrice Motsepe, president of Mamelodi Sundowns, will monitor Ahmad’s March 2 appeal with keen interest.

The Council of Southern Africa Football Associations (Cosafa) will vote for South Africa's Patrice Motsepe at the election for the new Confederation ...
Sport
1 year ago

Cas’ statement read: “The Court of Arbitration for Sport (Cas) has registered an appeal filed by Mr Ahmad Ahmad against the decision of the Adjudicatory Chamber of the Fifa ethics committee issued on November 19 2020 (grounds served on January 21 2021).

“Such decision ... imposed on him a ban from taking part in any kind of football-related activity at national and international level for five years, as well as a fine of CHF200,000 [about R3.4m].

“With his statement of appeal requesting the annulment of the Fifa decision, Mr Ahmad filed a request for provisional measures in order to be able to participate in the elections of the African Football Confederation (Caf) on March 12 2021.

“In agreement with Mr Ahmad and Fifa, the Cas initiated an expedited procedure and has fixed the hearing date for March 2 2021 (with a reserve day on March 3 2021). The Cas panel in charge of the matter intends to render a final award shortly after the hearing, i.e. before March 12 2021.

“Due to a risk of irreparable harm for Mr Ahmad if the disciplinary sanction is maintained during the period prior to the Caf elections, the Cas panel has upheld the request to temporarily stay the effects of the decision of the adjudicatory chamber of the Fifa ethics committee until the day that the final Cas award is issued. However, the panel has emphasised that such temporary decision does not prejudge in any way the decision it will take after analysing the merits of the case ...

“On the other hand, the arbitral panel has rejected the request for provisional measures filed by Mr Ahmad seeking that an order be imposed preventing Fifa from taking any decision aimed at preventing Mr Ahmad from participating in, or aimed at making it difficult for him to participate in, the election for the Caf presidency ...”

Motsepe is competing for the Caf presidency with fellow candidates Augustin Senghor of Senegal, Ivorian Jacques Anouma and Ahmed Yahya of the Mauritania Football Federation.

The Sundowns owner’s candidacy was approved by Fifa’s integrity and eligibility review committee this past week.

Patrice Motsepe's bid to become the next president of the Confederation of African Football (Caf) is gaining momentum‚ but the mining magnate has ...
Sport
1 year ago

Patrice Motsepe’s path to the Confederation of African Football (Caf) presidency might be easier with incumbent Ahmad Ahmad out of the race‚ but the ...
Sport
1 year ago

Nothing captures the crisis of our football on the continent than this week’s suspension of Confederation of African Football president Ahmad Ahmad ...
Opinion
1 year ago
Next Article