Ntsundwana happy to be loaned out, again 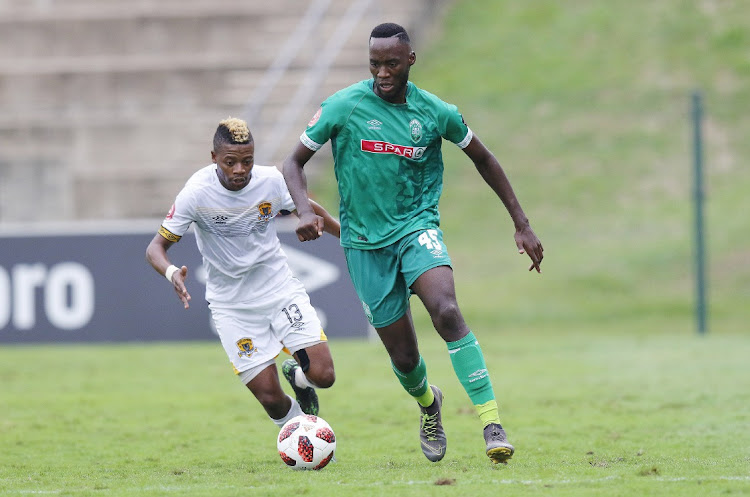 Somila Ntsundwana of Amazulu FC and Pentjie Zulu of Black Leopards during the Absa Premiership match between AmaZulu FC and Black Leopards at King Zwelithini Stadium on May 04, 2019 in Durban, South Africa.
Image: Anesh Debiky/Gallo Images

Promising AmaZulu striker Somila Ntsundwana has taken Usuthu’s decision to loan him out for a second time on the chin.

“I wasn’t surprised to be sent out on loan because I was not getting game time. I accepted the decision because I know AmaZulu wish to see me playing week-in and week-out. They have good intentions about my career…I know that,’’ Ntsundwana told Sowetan yesterday.

The lad from Eastern Cape found the competition for starting slots rather stiff at Usuthu, with seasoned centre-forwards like Lehlohonolo Majoro, Siphelele Mthembu, Bonginkosi Ntuli and Augustine Mulenga up in the pecking order.

“There are a number of quality strikers who're more experienced than me, so it’s wise for me to go out and accumulate that experience, hoping that in the future I will come back and compete with them,’’ said Ntsundwana, who’s nicknamed Balotelli, thanks to his physical strength homogeneity that is similar to Italian striker Mario Balotelli.

Ntsundwana is the first casualty of new coach Benni McCarthy at Usuthu. Under previous coach Ayanda Dlamini, Ntsundwana had played three games, while McCarthy had just used him once before shipping him out on loan. Even so, Ntsundwana insists there was no bad blood between him and McCarthy.

“Coach Benni was a striker, so I was learning a lot under him. At the end of the day I had to leave because I want to play and he gave me his blessings. He told me to go out there and work hard," said Ntsundwana.

“I get along very well with coach Benni and he encouraged me to do well at Richards Bay. He’ll be monitoring my progress, so I might work with him again in future."

The Capetonians are 13th on the log with 11 points.

Veteran goalkeeper Mbongeni Mzimela, 35, yearns for the last shot at the elite league, preferably with his current side, Bizana Pondo Chiefs, before ...
Sport
1 year ago

JDR Stars owner-coach Nditsheni Masisi is confident about their promotion prospects, pinning his hopes on their new Cameroonian striker, Auguste ...
Sport
1 year ago
Next Article