Hunt as Chiefs prepare for empty derby against Pirates: ‘We miss the fans greatly’ 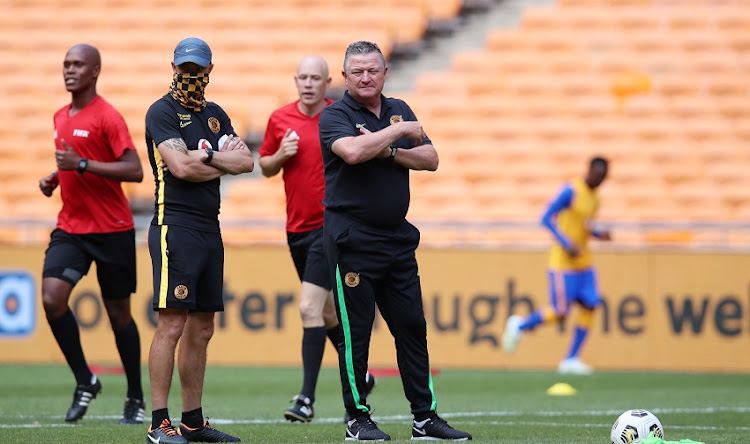 Kaizer Chiefs coach Gavin Hunt has admitted that Amakhosi players desperately miss the presence of their adoring fans in stadiums.

Due to Covid-19 lockdown restrictions that have been in place for more than 300 days‚ fans are not allowed at sporting events and Saturday’s Soweto derby against Orlando Pirates at Orlando Stadium will once again be played behind closed doors.

Pirates and Chiefs‚ who are placed fifth and seventh on the standings‚ go into this match having dropped points in their previous matches TS Galaxy and Baroka in midweek respectively.

“Generally you need the support of the fans and I think we could have got a few more points‚ but it is what it is‚” said Hunt as Amakhosi prepared for the short trip to their bitter rivals in Soweto.

“The whole world has been affected‚ a team like Chiefs cries out for the supporters and there is no doubt about that. It elevates the team to another level‚ certainly we miss them.

“For me it has always been the other way around playing in front of 500 supporters and against 50‚000 [at Hunt’s previous clubs]. Nobody saw this coming but we do miss the supporters greatly.”

Over their last five league matches‚ where they won three and drew two‚ Chiefs have only conceded two goals and Hunt put that down to getting combinations right and players understanding each other.

“Anytime you go to a new club‚ you want to work on that area of the pitch. Obviously we weren’t good in the beginning but it’s all about combinations and understanding.

“I don’t think we are anywhere near the final product but it’s an ongoing process and we need to keep on working on and that’s what we can do. It is cutting out and eradicating mistakes‚ playing people where they are comfortable and where it suits them.”

Over the last few matches against AmaZulu‚ Cape Town City‚ Tshakhuma Tsha Madzivhandila‚ Stellenbosch and Baroka‚ Hunt used Daniel Cardoso in the midfield in the absence of Willard Katsande.

But he didn’t want to comment when asked if Cardoso will once again be deployed in the midfield where he will be up against the likes of Thabang Monare‚ Ben Motshwari‚ and Fortune Makaringe.

“I am going to play him as a striker this time … no‚ I don’t know‚” was how Hunt responded‚ jokingly‚ tom a question on Cardoso but‚ there is every possibility that defender will continue to play in front of the back four against Pirates.