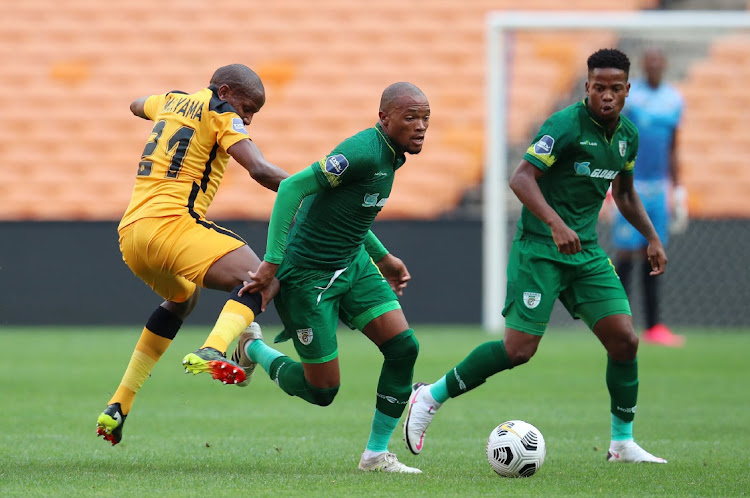 Goodman Mosele of Baroka challenged by Lebogang Manyama of Kaizer Chiefs during the DStv Premiership 2020/21 match between Kaizer Chiefs and Baroka at the FNB Stadium, Johannesburg on the 26 January 2021.
Image: Muzi Ntombela/BackpagePix

As Kaizer Chiefs’ next game, the Soweto derby against Orlando Pirates at Orlando Stadium on Saturday, will see them reach the halfway point of the season, coach Gavin Hunt has conceded the club have seen more negatives that positives midway through the term.

Speaking post their 1-all draw versus Baroka, where they were aided by a late Goodman Mosele own goal to level matters after Thami Masiya had put the visitors ahead at FNB Stadium on Tuesday, Hunt methodically summed up how they have fared midway through the campaign.

“But you know…we qualified for the group stages of the [CAF] Champions League which is very good. We did very well in the qualifying games. At some times it [the Champs League] takes away a lot of the league [momentum]. In the league we’ve been poor, we certainly need to be above 25 points, which we haven’t got yet [they are on 18 points from 14 games].

Hunt also insinuated he’d expected the Baroka clash to be easier for them. The Chiefs coach wanted his troops to put Bakgaga tothe sword to boost their morale ahead of the Soweto derby, their last game of the season’s first stanza.

“I knew Stellenbosch were going to be difficult. But I thought today [on Tuesday] was a game we could really win and it will give us a little bit of boost for the last game of the first round,’’ noted the Chiefs trainer.

Chiefs have now gone five games without a defeat with three wins and two draws. This has raised expectations that the Soweto club will soon turn the corner after a disastrous start to the term, where they won just one of their nine opening matches, suffering four defeats and four draws.

“There’s no doubt that the signs are better in my eyes. We need game toughness, we don’t have that. We need more game toughness. It will take a bit of time,’’ said Hunt.

Chiefs coach Hunt insists Pirates are the furthest thing from his mind: 'I don’t even think about the derby'

The Soweto derby is the furthest thing from Kaizer Chiefs coach Gavin Hunt's mind and he insists that he is not thinking about the looming date ...
Sport
10 months ago

Kaizer Chiefs goalkeeper Itumeleng Khune's absence from the starting lineup has raised eyebrows among the club’s fans but coach Gavin Hunt says his ...
Sport
10 months ago
Next Article