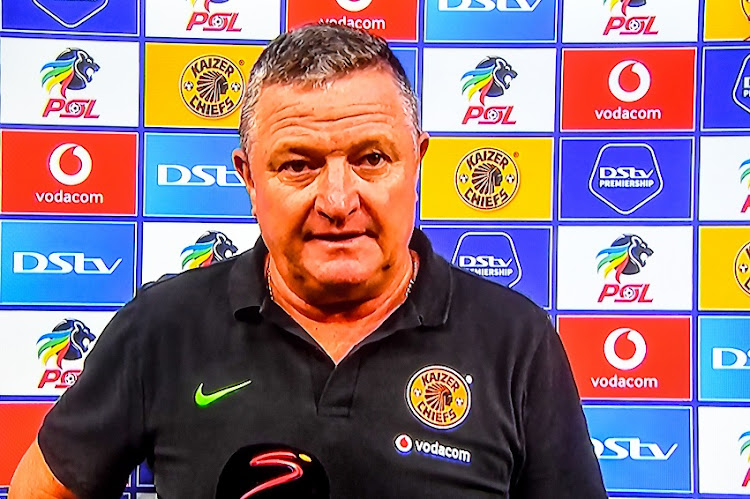 Kaizer Chiefs coach Gavin Hunt has called on young players in his team grab the opportunity in the Soweto derby against Orlando Pirates at Orlando Stadium on Saturday.

Amakhosi visit the Buccaneers for their much-anticipated DStv Premiership encounter looking to stretch their unbeaten run to six games following a recent impressive run of three wins and two draws.

SA Under-23 internationals Happy Mashiane and Nkosingiphile Ngcobo‚ who have impressed in recent games‚ are almost certainties to start against Pirates and Hunt may also give an opportunity to Darrel Matsheke and Njabulo Blom‚ other young players emerging at Naturena.

“For these young players who are coming in‚ they have been given a chance and now they have to hold onto those chances‚” said Hunt.

“It’s important that we play properly and improve with or without the ball and that is our own game process.”

Hunt said that Chiefs’ preparations will remain the same as they have been for any other match in the season despite the magnitude of the match.

“We have to treat it like any other game. Obviously there is expectation around the place but we have to try and not do anything out of the ordinary‚” the coach said.

“As I said‚ hopefully we can try and improve from the last time we played and that’s all we can do. We have to try and be positive and play in a way that I think we can get a positive result.”

Looking at Pirates‚ who have been inconsistent recently with two wins and draws and one loss over their last five matches‚ Hunt said he is expecting the Buccaneers to put out a strong line-up for the derby.

“They have had a great start to the season and they have won a trophy already. They have made some very good signings‚ some of those players I know very well and they have come in and fitted very well. They have certainly taken the team to another level‚ that’s for sure‚” Hunt admitted of the star-studded squad available to Bucs counterpart Josef Zinnbauer.