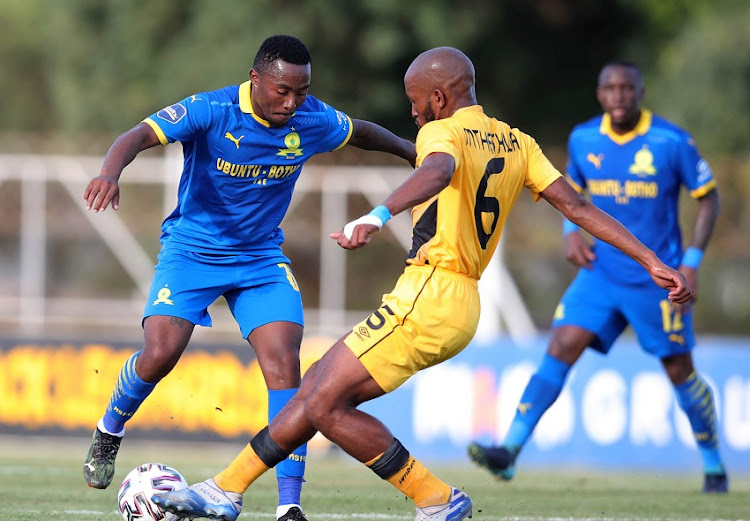 Mamelodi Sundowns were matched blow-for-blow by Black Leopards, and in the end it was the 10-man Brazilians who smash and grabbed a late 2-1 DStv Premiership win at Thohoyandou Stadium on Wednesday.

Ovidy Karuru struck Leopards ahead in the 46th minute, seconds after the restart for the second half. Peter Shalulile’s spectacular scissor-kick finish provided Downs’ 64th-minute equaliser.

In a match of ragged defence but plenty of goalmouth action, after Sundowns centreback Mothobi Mvala’s 66th-minute dismissal, Shalulile banged a second strike five minutes into 10 of added time to earn the grateful Brazilians a late winner.

Relegation-battling Leopards were playing their first game under caretaker-coach Lehlohonolo Seema following Dylan Kerr’s “parting of ways” on Monday, and the players appeared to be out to impress the new man in charge, tirelessly harassing and going toe-to-toe with Downs.

As Sundowns have laboured to four draws in succession their coaching trio of Manqoba Mnqithi, Rulani Mokwena and Steve Kompehla have drawn criticism for perceived tinkering – a situation not helped by injuries and Covid-19 precautionary measures.

On Wednesday 21-year-old Siphesihle Mkhize came in for Thapelo Morena at right-back. Gaston Sirino, having not done much wrong in Saturday’s 1-1 draw against Moroka Swallows, found himself on the bench, Shalulile returning to the starting XI.

On a patchy surface that was also wet, so got further scuffed under foot, Downs could not boss proceedings the way they would have wanted to.

Leopards matched the Brazilians for chances in the opening half. Come the start of the second they might have felt they deserved a goal. Lidoda Duvha got one quite 28 seconds from the restart.

From the kickoff they worked the ball down the right, fed Roderick Kabwe outside the box in the centre, who slipped a pass for the run of Khumalo on the left, who struck low. The path of the strike beat Onyango, and Karuru was on hand to stretch for a finish into an open goal.

The match was held up for seven minutes after an ugly clash of heads of Leopards players Sibongiseni Mthethwa and striker Lifa Hlongwane saw the latter taken off by ambulance.

Soon after the restart, substitute Sirino took a throw-in on the left, the ball was worked back to the Uruguayan, who squared for Shalulile to see a first strike hit the leg of right-back Tebogo Makobela. The ball looped up for the Namibian to spectacularly blast a scissor-kick past goalkeeper King Ndlovu.

Moments later, from a game of pinball in the centre circle the ball squirted to Ramagalela on the wrong side of Mvala and free to run through. Mvala had to foul, and referee Philangenkosi Khumalo flashed red.

With Downs' defence reeling from losing the centreback Kabwe could not get over Khumalo’s cross flashed across the face with Onyango stranded, then the Zambian forced an awkward save with a low strike from Downs' keeper.

For Downs Sirino headed from close range into Ndlovu’s legs, Leopards’ keeper also stopping at the feet of Zwane.

Deep in injury time substitute Lesedi Kapinga skipped past two challenges in the centre and saw a low shot blocked, the predatory Shalulile pouncing on the loose ball to strike the winner.