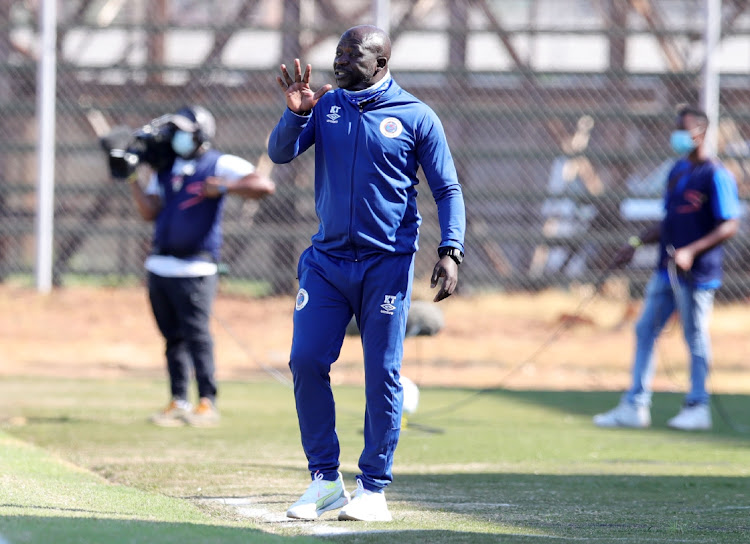 SuperSport United's title challenge is gaining momentum, but coach Kaitano Tembo has warned his players not to get carried away by their recent run of results.

The three-time league champions are unbeaten in their last eight matches. They collected 16 out of a possible 24 points and are equal on points with first and second place teams Mamelodi Sundowns and Swallows.

Tembo's troops recorded a 2-0 victory against newcomers Tshakhuma Tsha Madzivhandila in Venda at the weekend to join the leading pack. Second-half goals by Bradley Grobler and Sipho Mbule helped them to win the game.

Matsatsantsa will now play Swallows at the Lucas Moripe Stadium in Atteridgeville on Saturday at 5pm.

The Zimbabwean-born mentor said the players have a couple of days to recover and shift their focus to Swallows.

"We scored two great goals, and we defended well. I am happy that we won the game on a muddy pitch. The rain made things difficult, but we showed our class and won the game. We opened them up, and we had a brilliant game," said a jubilant Tembo.

Tembo said he was looking forward to the next match against unbeaten Swallows. "They are unbeaten in the league and have a never-say-die attitude. We have a bit more days to try and recover. I told the players to take it one day at a time. We are in a good position on the log, but we must not get carried away. We have not won anything yet. I want consistency, and to mount a strong challenge for the league title, you have to be consistent," he said.

Kaitano Tembo has highlighted recovery and trying to be as fresh as possible as two key ingredients ahead of SuperSport United’s next DStv ...
Sport
1 year ago