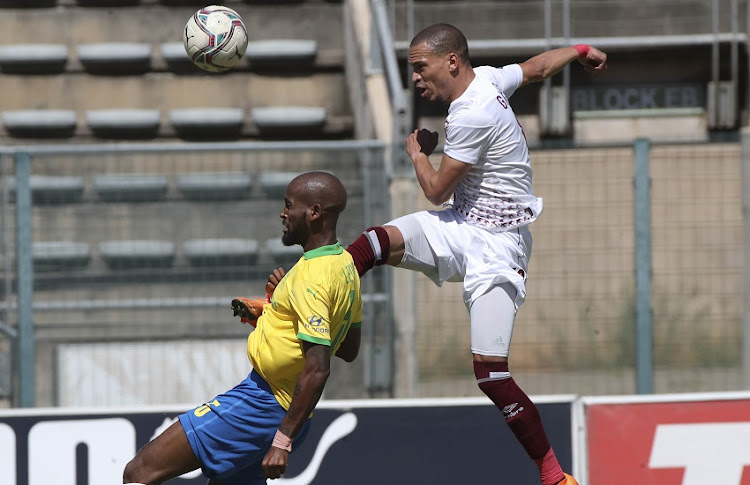 Swallows FC’s dream start to 2020-21 knows no bounds, on Saturday in oppressive heat at Lucas Moripe Stadium even recsuing a dramatic last-gasp 1-1 draw from jaws of defeat against trophy machines Mamelodi Sundowns.

Kermit Erasmus put back-to-back defending champions Sundowns ahead, moments before the break in the 45th minute, after the Brazilians had bossed the opening half.

Downs had appeared to shut Swallows out in the second half but George Maluleka gave away a free-kick seconds past referee Luxolo Badi’s five minutes added.

Downs goalkeeper Denis Onyango parried the strike of Kagiso Malinga and fellow substitute Musa Nyatama knocked in the rebound in the 97th to earn yet another dramatic, never-say-die result for Swallows, despite question marks overt offside.

Sundowns’ unbeaten cruise rocket start to the season had mildly misfired with draws against SuperSport United and Bloemfontein Celtic. Promoted Swallows’ anti-ballistic missile had chased Downs’ launch, coming into the game on the same points, wins and draws (26, seven and five) in the remarkable story of 2020-21.

Apart from glimpses of the Birds’ attacking potential and exuberance that have troubled other top-flight opponents, Sundowns displayed their class snuffing out the GladAfrica Championship champions tactically.

The Brazilians’ movement, even in relentless heat, was too much for the Birds in the first half. Downs appeared to have closed the game in the second. But this Swallows combination are on a role, and can never be written off.

In the stifling 34 degrees Celsius temperature preceding an apparent approaching downpour caused by Cyclone Eloise’s approach through Mozambique to the Highveld and Zimbabwe, Sundowns looked to be gathering intensity like a storm cloud in the opening half-hour.

Swallows looked dangerous with the ball at their feet, managing darting attacks into the Brazilians’ box, which were dealt with. Downs flexed their considerable muscle to open chances in the other direction.

The lively Uruguayan set up a further chance robbing Sifiso Hlanti at the right corner flag and squaring low to Zwane, whose backheel teed up Hlompho Kekana to strike a shot low and inches wide.

The Brazilians continued to play mostly in Swallows’ half, the heat after a water break seemingly taking its toll on their penetration. A strike though, continued to lurk.

It came in a critical phase in the final minute before the break and was simply executed. Kekana won the ball high in midfield, Maluleka picking up the loose ball and pushing Erasmus through on the left of the area, who could pick his spot at the top-right corner past Vries.

Sundowns leaned on the heat to slow the game from the break and shut the Birds out.

But, with the clock ticking 20 seconds past the five minutes added, Mothobi Mvala lost a ball outside Downs’ area and Maluleka had to foul Sammy Seabi.

Malinga’s free-kick had swerve and power enough force Onyango to parry awkwardly, Nyatama on hand to head in the rebound.