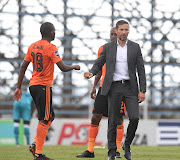 Orlando Pirates coach Josef Zinnbauer says the conditioning of players as games coming thick and fast‚ and some of the havoc being played with his strikers due to injuries‚ are the reasons informing some of the chopping and changing of his players up-front.

Pirates‚ having gone on a run of 10 DStv Premiership games unbeaten back to last season‚ have hit a mini-slump‚ gaining just five of a possible 15 points from two defeats‚ two draws and a lone win in their last five matches.

Goals have become harder to come by‚ with Bucs failing to score in three of those last five games‚ notching four goals‚ having found the net 15 times in the previous 10.

Zinnbauer was asked after his team’s 0-0 draw against Golden Arrows at Orlando Stadium on Saturday about his decision to play small‚ normally deeper-employed Terrence Dzvukamanja at the centre of a front three when he had striker Gabadinho Mhango come off the bench.

He said‚ given key injuries to in-form Zakhele Lepasa and Tshegofatso Mabasa‚ and Mhango having recently returned from injury‚ he felt the need to protect his last out-and-out striker.

“It’s the conditioning. You remember ‘Gabba’ [Mhango] was out and he had two games of 90 minutes in a row. And you see that he comes in and five minutes later he was injured‚ with inner muscle problems‚” Zinnbauer said.

“We get the feedback on what has happened‚ and then it’s not possible that you can start the player with problems. And normally you have to give him a break but we needed a goal and this was the reason we brought him in.

“These are always the reasons that you have. When the players are out‚ like Lorch also [at the start of the season]‚ the conditioning goes down. And we have a lot of games coming.

“ ... And we have to be careful with this. Gabba was injured and he worked on the conditioning‚ and he came back and played 90 minutes [twice]‚ and then you need a break normally.

“And now you bring him in and take a risk and get something happening again. I hope it’s not such a big problem but maybe we are unlucky and we lose the next striker.

“Lepasa and Mabasa are the next strikers who we need at the moment. Mundele [Congolese signing Jean-Marc Makusu] has not been here long and needs conditioning. He had a long time injured and needs time.

“But we have the other players and this is the management that we need. We have the next game in three days‚ and normally in this time we would give a player a break. But now we need the players‚ and we need the results.

“This is always the balance you need to find. And then you say‚ ‘OK‚ let him play’‚ and then you take a risk.”