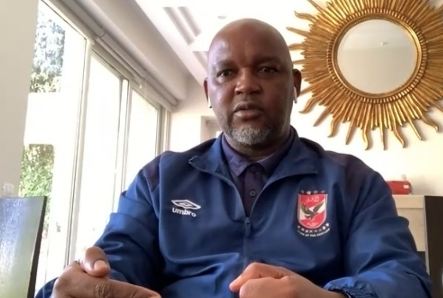 Pitso Mosimane says Al Ahly have moved on from their failure to sign Gaston Sirino from the coach’s former club Mamelodi Sundowns‚ but that he is sure the Uruguayan “is crying” for that missed chance.

Mosimane suggested a deal for Sirino would have been highly lucrative to the 29-year-old attacker who the coach signed to the Brazilians from Bolivar in Bolivia in 2018.

Sundowns broke off a concerted negotiation effort from Ahly to sign Sirino in late December saying the Cairo giants were not offering the Pretoria club enough.

“I spoke to the South American – the agent who gave us [Sundowns] Sirino.

"He has suggested a few players for us. We are monitoring the players he has recommended‚” Mosimane told an online press conference of the SA Football Journalists’ Association on Wednesday.

“And we move on with Gaston Sirino. I mean‚ you have seen what he said – he has spoken straight and openly about missing out on the opportunity to play for the biggest club on the continent.

“I understand. We must remember‚ when I recruit‚ I do it with a vision and I tell the players that vision.

“And I told Sirino [when he joined Sundowns]‚ ‘Look‚ at your age’‚ because he came to South Africa aged 26‚ and said‚ ‘and you have missed Europe‚ no doubt about that. So your chance is China‚ the Middle East or South Africa’.

“I said‚ ‘At this point in time South Africa is giving you that opportunity.

"Come here and do well and when you play in the [Caf Champions League]‚ in the [Club] World Cup‚ the Middle East will see you‚ and that’s your future beyond Sundowns’.

“I mean we all know the financial remunerations that are happening in football.

“ ... It is the same situation for Gaston. That was the only part for him moving [to Sundowns].

"From South America you go to the Middle East or South Africa‚ or China‚ or follow Dino Ndlovu’s route [to Azerbaijan and China]‚ especially when you are over 25‚ 26.

“Back home that education still needs to be there for players and even coaches.

"Once you’re past 25 and you’re still good you’ve got to make sure the contracts are right‚ because there are only a few years to go.

“So unfortunately Gaston is 29 now‚ he’s going to 30. So I understand how he was reacting to say‚ ‘I’ve got a chance to make a bit more for my family‚ and myself‚ because that might be my last contract’.”

Mosimane has previously stressed that Ahly’s interest in Sirino pre-dated the coach’s arrival at the club.

Pitso Mosimane says Gaston Sirino would have been on a lucrative deal with Al Ahly had Mamelodi Sundowns agreed to the offer.
Image: Lefty Shivambu/Gallo Images

The skilled playmaker signed a new five-year contract at Sundowns in July 2020‚ two months before Mosimane left the Brazilians in a bombshell move to Ahly.

“Unfortunately players have 40‚ 50 years to live after football. … So you’ve got to make as much as you can to sustain you for 65 years to live.

"What are you going to live on because you have no skills outside football?

“That’s why players move to Asia‚ to Japan‚ the Middle East‚ because it’s their last chance‚ they have to go.

“That’s the way it is with Gaston. ... He had that chance. And he’s crying for that chance – I know for sure.”

Sirino had indicated in press interviews that he wanted to make the move to Ahly.