Celtic give champions Sundowns a fright in dramatic goalless encounter 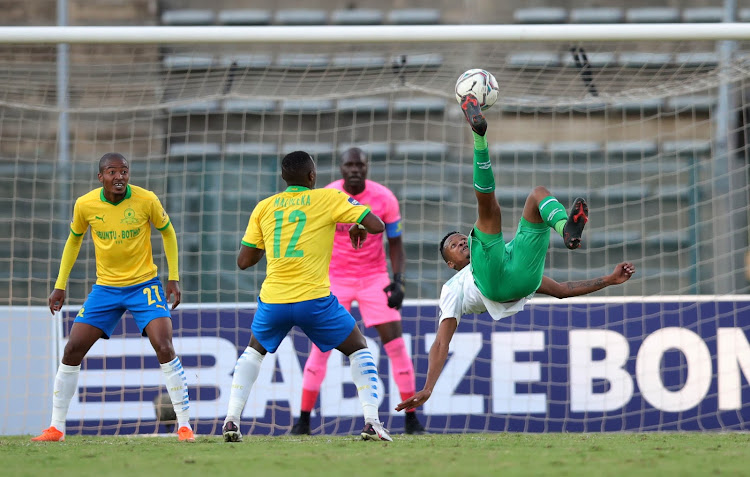 Mamelodi Sundowns were held to a 0-0 draw by an industrious Bloemfontein Celtic in a league match played at the Lucas Moripe Stadium on Tuesday evening.

The result means that the defending champions have dropped four important points in their last two league matches and they also failed to find the back of the net.

Sundowns may be overtaken at the top of the pile if second-placed Swallows FC gets all the three points in their next match against Chippa United on Wednesday.

They remain top of the standings with 26 points from 12 matches but a win for Swallows  will see the Brazilians drop to second spot and two points adrift.

Sundowns are also threatened by SuperSport United who will draw level with them on points should they win their next match against AmaZulu on Wednesday.

The two teams created a number of chances in the opening 20 minutes with Peter Shalulile‚ Themba Zwane‚ Kermit Erasmus and Lebohang Maboe on the forefront for Sundowns‚ but they could not find the elusive opener.

The most notable attacks produced by the visitors came from the efforts of Motebang Sera‚ Siphelele Luthuli‚ Andile Fikizolo‚ Phalane Lantshene and Harris Tchilimbou‚ but they could not trouble Sundowns goalkeeper Denis Onyango.

Phalane came the closest to opening the scoring when his well-taken free-kick flew agonizingly wide of the upright from the edge of the box after he was brought down by Mothobi Mvala.

Sundowns man Tebogo Langerman was denied by the cross-bar and moments later Zwane struck the side netting following a wonderful attacking move that included Thapelo Morena and Maboe on the half hour mark.

The Brazilians missed another opportunity to open the scoring when Celtic goalkeeper Jackson Mabokgwane denied Erasmus after the striker was released by a clever back heel pass from Zwane.

Celtic reacted with a quick counter-attack that ended with under pressure Langerman clearing Luthuli’s close range shot after they caught the Sundowns defence napping.

Five minutes into the second half‚ Celtic suffered a huge blow when Mabokgwane was forced off the field with what looked like a serious shoulder injury and he was replaced by Sipho Chaine.

After 56 minutes Erasmus was denied by the cross-bar after he unleashed a powerful left-footed drive that gave Chaine no chance.

A few minutes later what appeared to be a clear goal from Sera was disallowed after the far side assistant flagged him off-side.

Sundowns host Swallows in their next game this weekend while Celtic fly out on Tuesday night to Benin’s capital Porto Novo to take on Rivers United of Nigeria in their rescheduled Caf Confederation Cup‚ last 32 tie.

The Confederation of African Football (Caf) has ordered the second leg match to be moved to a neighbouring Benin who have more lenient Covid-19 protocols for travellers arriving from South Africa.