Mothobi Mvala ready to fill any role in Sundowns' midfield 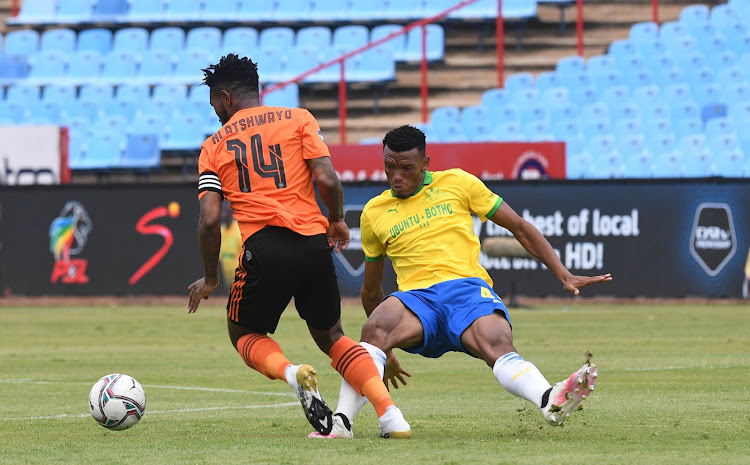 Mothobi Mvala is working hard to cement his place in the starting team in the star studded Mamelodi Sundowns and impress the hard to please trio of coaches.
Image: Sydney Mahlangu/BackpagePix

Competition at star-studded Mamelodi Sundowns is fierce and imposing central midfielder Mothobi Mvala is prepared to fight for his place as a No.6 or No.8.

Mvala is in healthy competition with the likes of Andile Jali‚ Rivaldo Coetzee‚ Hlompho Kekana‚ Grant Margeman and George Maluleka where co-coaches Manqoba Mngqithi‚ Steve Komphela and Rulani Mokwena have been rotating.

In five matches for the Brazilians since he joined from Highlands Park along with striker Peter Shalulile‚ he has been used both as a defensive midfield No. 6‚ or more advanced‚ box-to-box No. 8 and he enjoyed both roles.

“Sometimes the coaches play me as No. 6 and sometimes they play me as No. 8. I think I played as a no.6 twice and as an '8' twice and I really enjoyed the roles that I was given by the coaches‚” Mvala said as Sundowns prepared to take on SuperSport United in the anticipated top-of-the table Tshwane derby at Lucas Moripe Stadium on Saturday.

Even more impressively‚ Mvala has already found the back of the net twice in the preliminary stages of the Caf Champions League against Botswana minnows Jwaneng Galaxy.

“Talking about the two goals‚ one was scored from a set-piece and the other from open play. When I play as a No. 6‚ most of the time it's about protecting the defence. I also help to start play and when we get a set-piece I go forward because we have guys who can deliver the balls like Aubrey Modiba‚ Hashim Domingo‚ Rivaldo so that I can finish with the head.

"A couple of games that we played‚ the guys delivered good balls and managed to head one and that is my job when I play as a '6'.

“When I play as a No. 8‚ I have a chance to get closer to the goals and with the quality that we have I know that in 45 minutes I will at least have four or even more goal-scoring opportunities. I enjoy playing in both positions and I appreciate the help from my teammates for encouraging me and the coaches for pointing out areas where I need to improve but we are getting there.”

Having already tasted Champions League with two goals‚ Mvala wants more and he can’t wait for the serious matter of the group stages where Sundowns have been drawn with CR Belouizdad‚ Al Hilal‚ and TP Mazembe.

“I am looking forward to the group stages of the Champions League and I have been talking to a couple of guys who have played at that level like Tebogo Langerman and Mosa Lebusa‚" he said.

"They have told me to be prepared because it's dog-eat-dog there and you hustle for a win at home and away from home. I am ready for it and we will see what happens in the coming months.”