Kaizer Chiefs coach Hunt: ‘We know we are in a fight now’ 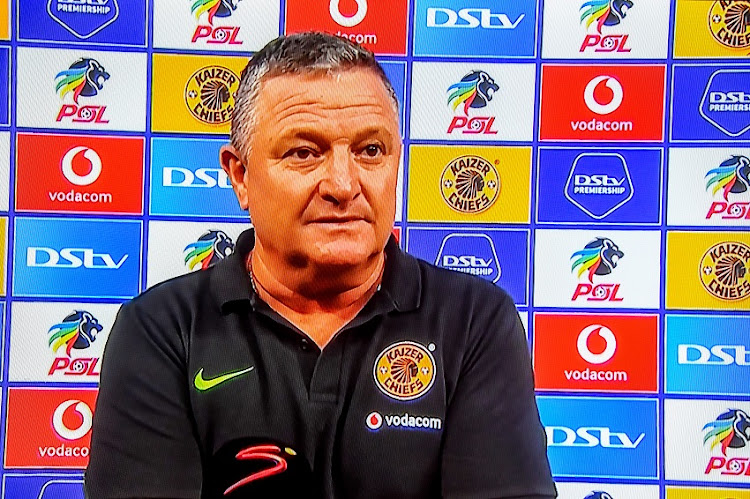 Kaizer Chiefs coach Gavin Hunt says his side know they are in a battle as they have slumped to 14th place in the DStv Premiership‚ and on top of that have a tough programme as they embark on the Caf Champions League group stages.

Amakhosi’s dismal start of just a single win in the league in 2020-21 was extended to nine matches as they slumped to a 2-0 defeat to the brace of Maritzburg United’s bogey striker Judas Moseamedi at FNB Stadium on Saturday.

As Amakhosi face Benni McCarthy’s ambitious AmaZulu in another tough fixture at Kings Park on Wednesday‚ Hunt said Chiefs‚ who announced the two-month injury of playmaker Khama Billiat on Tuesday‚ know they are set for a fight turning their season around.

“Ja‚ we’ve obviously got to battle – we know we are in a fight now‚” the four-time PSL winner said.

“Our programme is obviously very difficult with our squad. we are going to have to battle‚ and we are playing every two or three days.

“So I think maybe the best is for us to get away from here as well‚ and play outside‚ because I think we’re a bit better there. But having said that I think we’ve got to be better at home‚ because our home record is not very good.”

Maritzburg coach Ernst Middendorp‚ who had his contract discontinued despite guiding an ageing squad to runners-up in 2019-20‚ was gracious in victory as he returned to FNB Stadium with a victory. The German said he felt Chiefs were disadvantaged by playing away in Angola last Tuesday‚ beating Primeiro da Agosta 1-0 to reach the Champions League group stage‚ while United had a week without football.

Hunt refused to take the bait.

“We can’t use that as an excuse‚ about travelling and that. You know‚ I mean‚ it wasn’t easy but that’s still no excuse‚” he said.

“We have to be better than that. We had four days. What we couldn’t do is change the team‚ but that’s still no excuse because players have to step up.”

Hunt also did not feel Middendorp’s intimate knowledge of Chiefs was influential.

“Because obviously there are a lot of players who played last year who weren’t playing on Saturday‚ so‚ no‚ I don’t think so.”

Teacher Hunt’s contests with student McCarthy‚ the Bafana Bafana legend whose career started under the former at Seven Stars‚ produced fireworks when the latter coached Cape Town City‚ and the match-up against Usuthu promises the same.