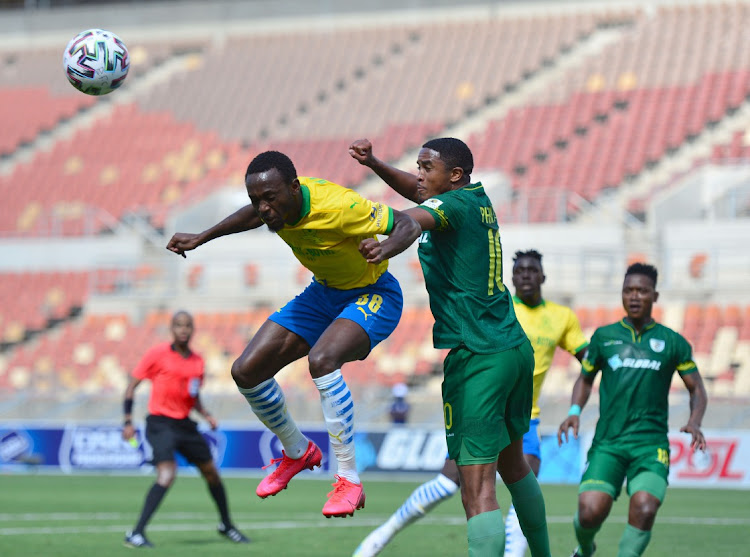 Mamelodi Sundowns co-coach Manqoba Mngqithi has revealed they are still keeping pace with the points target they set before the start of the season.

Speaking after their 2-0 win against Baroka away at the weekend, Mngqithi said their aim was to accumulate at least 12 points from each group of five games. Lyle Lakay and Themba Zwane netted the goals in Downs' triumph against Baroka.

“In our planning for the season, we put out that we’d want to achieve 12 points in every five matches. The first cycle [of five games], we got 13 points and the second cycle we got 11 points and dropped one point. This gives us exactly what we wanted to achieve,’’ Mngqithi said.

Without mentioning names, Mngqithi heaped praise on his fringe players who have stepped up to the plate whenever they are required to fill in for the regular starters.

“There were times where we were forced to use players that are not playing regularly and they came in handy. We really appreciate what we’ve achieved but this is just a beginning,’’ said Mngqithi.

The Umzimkhulu-born coach also reacted to their CAF Champions League draw, bemoaning the logistical part of it. The league champs were drawn against CR Belouizdad of Algeria, Al Hilal of Sudan and TP Mazembe of the Democratic Republic of the Congo in Group B.

“This stage of the Champions League, you can expect anything. But one would have wanted to have a little bit more of direct flights, which is probably what we might not get because even Lubumbashi [DRC] doesn’t have a direct flight at this stage,’’ said Mngqithi.

Mngqithi is also wary of the threat their Group B opponents pose, singling out Al Hilal as one team he thinks can prove stronger this season. The round-robin phase is scheduled to kick off on February 12 and 13, concluding by April 9 and 10.

“In terms of opponents, it’s a very, very tricky affair because Al Hilal at this stage, in my mind, is one team that is looking a little bit stronger,’’ noted the Downs coach.

“They are a team that we have to tread very carefully [against] and travelling to that side isn’t always the easiest. Let’s just hope in our first match, when we play them at home, we can get the maximum points.’’

Mngqithi added: “Mazembe is always a tricky affair. One would be fortunate the supporters aren't coming to the stadium because that environment can look very hostile for youngsters and new players but I believe we’ve got what it takes to compete in that space.’’

Mamelodi Sundowns have made the unusual step of congratulating rivals Kaizer Chiefs for reaching the group stages of the 2020-21 Caf Champions League.
Sport
3 months ago

Mamelodi Sundowns are strolling towards ending the first round of the DStv Premiership on top of the log and unbeaten after they did just enough to ...
Sport
3 months ago
Next Article