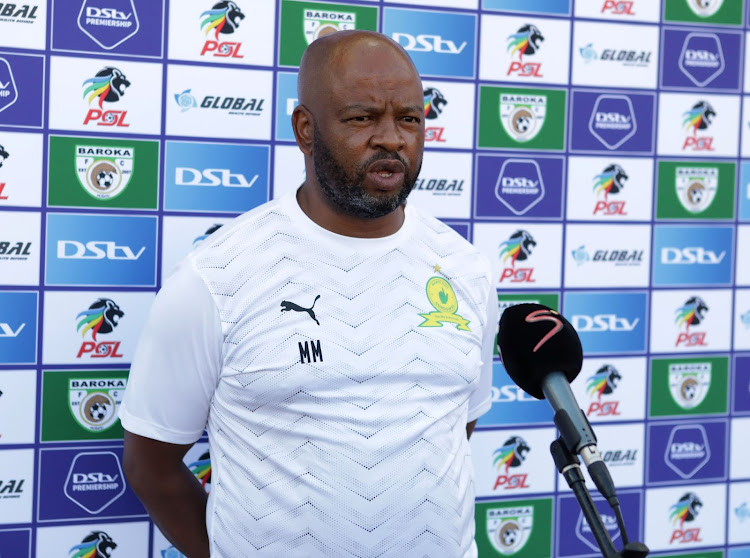 Mamelodi Sundowns co-coach Manqoba Mngqithi says the team's planning for this season was to achieve 12 points in every five matches they play.
Image: Kabelo Leputu/BackpagePix

Mamelodi Sundowns co-coach Manqoba Mngqithi is very pleased with the 24 points his side has collected from a possible 30 in their opening 10 DStv Premiership fixtures of the 2020-21 campaign in which the Brazilians are seeking to do what’s never been done in South African football – winning four championships in a row.

Mngqithi’s team grinded another well-deserved victory on Saturday in the scorching heat of Limpopo where their victims were Baroka FC that stood firm in the opening stanza before crumbling and succumbing to Lyle Lakay and Themba Zwane goals after the restart.

The Brazilians remain perched at the top of the Premiership, three points ahead of Swallows FC and they should stay there for a couple of weeks if they defeat their third-placed neighbours SuperSport United in the Tshwane derby on Saturday.

“In our planning for this season we said that we want to achieve 12 points in every five matches,” Mngqithi explained after Saturday’s game against Baroka at the Peter Mokaba Stadium in Polokwane.

“Our conditioning department has kept us strong. And credit must be given to all of them as they’ve kept the whole team fresh and ready because there were times when we forced to use the players that were not playing regularly.

“But they came in handy and we really appreciate what we’ve achieved thus far. But this is the beginning, we still have a long way to go and we should stay focused and keep our feet on the ground.”

Mngqithi will be particularly pleased to have seen Zwane returning and scoring his eighth league goal of the season after missing two league games due to an injury.

Zwane is now only one goal behind SuperSport’s Bradley Grobler in the Premiership top scorers’ chart.

Grobler scored his 57th goal in Matsatsantsa a Pitori colours in their 3-0 win against TS Galaxy on Saturday to equal Abram Raselemane’s club record of a player with most goals.

The reigning Footballer of the Season Zwane looked lively in Sundowns’ dynamic attack on Saturday and together with his striker partner Peter Shalulile, the slick attacker could have scored more goals if Baroka’s goalkeeper Oscarine Masuluke didn’t deny them on a couple of occasions that they tested him.