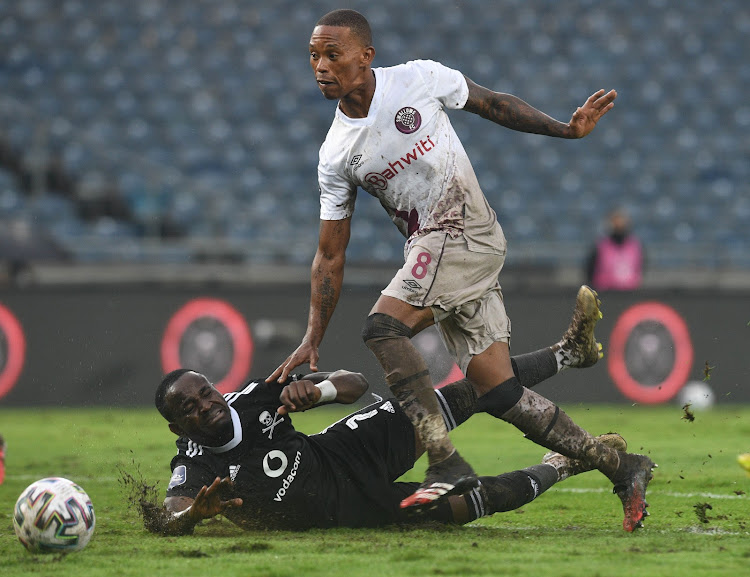 Ben Motshwari scored late to give Orlando Pirates the lead but Kamohelo Mahlatsi cancelled out his goal with the equaliser in the final seconds of the match at a wet Orlando Stadium in Soweto.
Image: Sydney Mahlangu/BackpagePix

After Orlando Pirates had scored late‚ Swallows FC's South African Under-23 international Kamohelo Mahlatsi stuck an equaliser deep in injury time to secure a share of the spoils in Sunday's 1-1 DStv Premiership draw at Orlando Stadium.

Swallows took the game to Pirates for much of the opening hour of the first "oldest dervy" since the Birds' relegation from the PSL in 2015. But Pirates appeared to time their step-up in tempo well and midfielder Ben Motswari's late opener in the 85th seemed enough to secure maxium points to Bucs.

Swallows‚ though‚ deserved something from the game‚ and to preserve what is now a remarkable 10-game unbeaten run in a dream start to life back in the top-flight for the promoted side. Substitute Mahlatsi scrambled an equaliser three minutes into added time.

As could have been expected from two carpet-playing‚ footballing teams‚ even on a sodden surface in rainy conditions the first half saw attractive combinations and intelligent probing from both sides‚ with Swallows edging the balance of chances.

Swallows‚ as they have against all opposition this season‚ had no fear pressing forward and early on Thabo Matlaba's low strike‚ skidding on the wet surface‚ stretched Wayne Sandilands.

Matlaba had to go off moments later‚ appearing to have a hamstring issue‚ and it was a mark of the quality that the Birds have assembled in their squad that one Bafana Bafana left-back was replaced by another - the man who snuffed out Egypt's Mo Salah at the 2019 Africa Cup of Nations‚ Sifiso Hlanti.

Swallows' tricky winger Kgaogelo Sekgota found space on the left and crossed low for Ruzaigh Gamildien to turn a shot at goal and force a save from Sandilands.

Pirates' promising right-back Wayde Jooste twisted into the area just after the half-hour‚ striking hard at Virgil Vries from a tough angle.

Pirates came out from the break seemingly intent on upping the tempo and forward momentum. Swallows responded in kind‚ as action swung from end to end of the Orlando pitch.

Again it was the Birds who emerged from the exchanges with the best opportunity‚ as winger Fawaaz Basadien's chip over the top landed at the feet of Gamildien to turn and call Sandilands into action again.

Bucs‚ though‚ were then denied what could have been the decisive opportunity to break the deadlock. Substitute Gabadinho Mhango slipped a pass to Fortune Makaringe‚ who burst through the middle and was hacked down by the challenge of Tlakusani Mthethwa.

To the dismay of Pirates‚ bizarrely referee Jelly Chavani booked Makaringe for diving.

Bucs‚ though‚ had found their stride and Lorch played Deon Hotto through on the left‚ Vries stopping at his Namibia international teammate's feet.

Bucs might have left it late to take command of the game‚ but when they did in was by the scruff of the neck‚ so when Motswari finally struck the opener it was not a surprise.

Bucs would have felt they had secured a win. But a substitute who has had impact for the Birds from the bench this season‚ Joseph Mhlongo‚ got into space on the right and squared hard and low‚ Mahlatsi getting in ahead of Vries and a marker to bury an equaliser with seconds left.