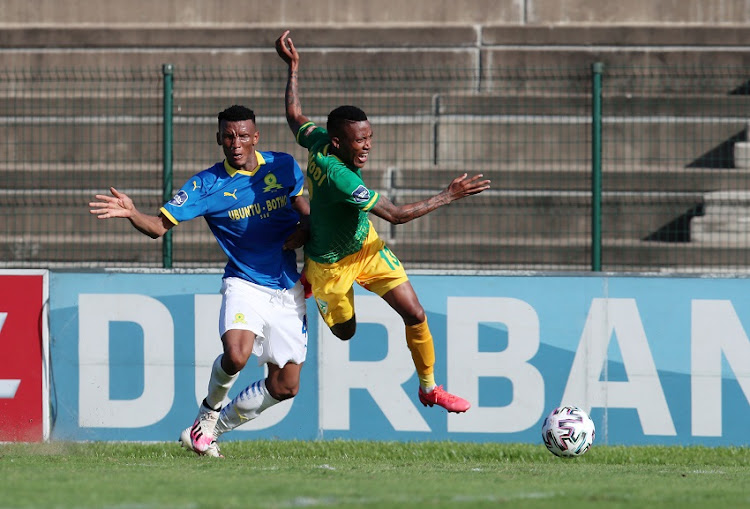 Mamelodi Sundows coach Manqoba Mngqithi is expecting big performances and goals from imposing midfielder Mothobi Mvala on the domestic front and in the Caf Champions League this season.

The Brazilians have booked a place in the group stages of the tournament for the sixth season in succession by overcoming Jwaneng Galaxy of Botswana 5-1 on aggregate‚ where Mvala contributed two goals.

Mvala‚ who joined Sundowns from Highlands Park with Namibian striker Peter Shalulile in the off-season‚ scored a goal each leg of the first round qualifier in Lobatse and Pretoria.

“He chips in with five to six goals a season‚” said Mngqithi on the Bafana Bafana midfielder.

“It’s very important to get a player who plays as a midfielder and contributes immensely on set-pieces‚ with forays into the box and he has a good shot in and around the D-line‚ which we normally call zone 14 in football. He is very deadly and that’s why he scored in Botswana.”

Mngqithi said Mvala‚ whose first match for Sundowns only came in the team’s eighth match of the DStv Premiership campaign against Golden Arrows‚ is working hard and there is more to come from him.

“We are excited to see that he did not crumble because at times most of the players who join Sundowns get disillusioned when they don’t get game if they were key players at their former teams. They start getting all these negative information and lose focus but he is a very good boy and he has been working silently behind the scenes.

“We were all excited with what we are getting from him but we believe we can still get more than what he is doing. We are working very hard on his attacking play‚ building up form the back‚ body positioning and all those elements that would help him not to be easily pressed by the opponents.

“There are a lot of positives that we are gathering from him and we hope to make him a better player with time because physically he gives you everything that you want. He’s got a fight in him and he is a very good player for the Champions League.

“That’s basically the reason he was brought here because in Africa you need soldiers and he is one of those.”

Mngqithi said Sundowns were not at their best in Tuesday’s 3-1 second-leg win against Galaxy at Loftus Versfeld.

“We knew the opponents are a little bit strong on set-pieces and transitions‚ which posed a threat to our compactness both offensively and defensively. We knew that if we could deal with those transitions and set-pieces we might stand a better chance to go ahead‚” he said.

“The game was a little bit scrappy. I was not excited with the flow and to a certain extent we also showed desperation because we wanted to get an early goal even though circumstances were not allowing.

“I was encouraged that we managed to score three goals even though I believe we could have scored more. We are still not as clinical as one would like to be in front of goals.”