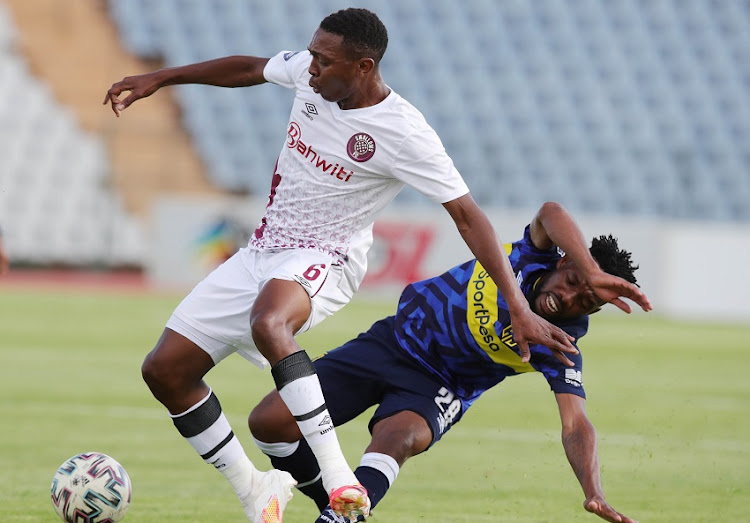 Newly-promoted Swallows FC continued to show their brilliant start to the 2020-21 season is not a fluke when striker Ruzaigh Gamildien scored a brilliant first half brace and defender Junaid Sait headed in the final nail in second half to give the Dube Birds their sixth victory in nine DStv Premiership matches – this time beating Cape Town City 3-2 with on Tuesday afternoon.

The win, in a drama-filled game in which both sides finished the match with 10 men, is a huge boost for the unbeaten Swallows ahead of their mouth-watering league clash against Soweto rivals Orlando Pirates at the Orlando Stadium on Sunday.

The Birds remain on the second spot and only trail leaders Mamelodi Sundowns on goal difference, a remarkable feat for a team that was competing in the GladAfrica Championship last season.

Swallows were full value for their maximum spoils and Gamildien could have scored more had he composed himself better in some of the chances his team created for him, especially in the first 45 minutes that Brandon Truter’s side dominated at their Dobsonville Stadium.

Gamildien who has now joined Themba Zwane of Sundowns and Bradley Grobler of SuperSport United on the top of Premiership scorer’s chart with seven goals, opened the scoring from the penalty spot in the 38th minute after he was fouled by Tashreeq Morris as he was about to finish a fantastic through pass from Thabo Matlaba on the left flank.

Three minutes later the former Chippa United striker was back again, this time beating Peter Leeuwenburgh after getting a well-weighted cross from Kgaogela Sekgota on the very same flank where City’s skipper Thamsanqa Mkhize was caught for pace.

In between these two goals Gamildien missed a sitter when he was one on one with Leeuwenburgh, his shot blocked by the long legs of the City keeper after getting a delightful through ball down the middle.

City played this match having announced just before kick-off that three of their key players Mpho Makola, Thabo Nodada and Craig Martin were missing because they’d tested positive for Covid-19.

As a result of this City only had seven instead of the now usual nine players on their bench in a match which was a first for former Bafana Bafana captain Aaron Mokoena as assistant to Dutch coach Olde Riekerink on the Citizens’ dugout.

Swallows had no Covid-19 worries as their coach Truter confirmed he had a clean bill of health in his exciting squad.

The match itself started at a medium pace with these teams meeting each other for the first time in their history, sizing each other before Gamildien lightened the encounter with some delightful finishes.

City started the second stanza better and their efforts gain momentum when they were rewarded a penalty after Ioannis Potouridis cross was handled by Matlaba inside the area and Mduduzi Mdantsane halved the score-line when he beat Virgil Fries in the 54th minute, scoring his sixth league goal of the season.

Swallows were reduced to 10 men after striker Zephania Mbokoma got a second booking in the 72nd minute.

The red card meant little for Swallows as they continued to press forward until Sait, the son of Pirates legend Kamaal Sait, rose high to head in Lebohang Mokoena’s corner kick in 76th minute to put the game beyond the visitors’ reach.

City’s defender Morris also got a red card from referee Thabo Mkhabela in the 72nd but a minute later Mdantsane headed in his seventh of the season but it was too late to help City avoid suffering a second defeat of the season.