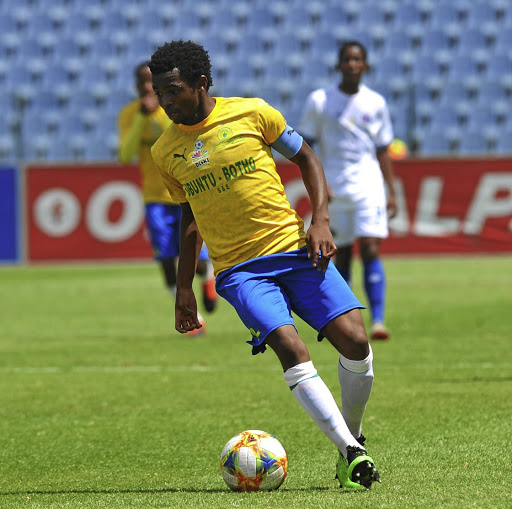 Mamelodi Sundowns youth international Promise Mkhuma probably has had to pinch himself now and then as his career at the country’s most successful club of the last decade has started with game time and league and cup winners’ medals.

As leaders Downs come back from the 2020-21 Christmas break with Saturday’s cracking DStv Premiership fixture against fifth-placed fellow title hopefuls Orlando Pirates at Loftus Versfeld‚ Mkhuma will be setting his sights on more playing time for the Brazilians in the coming year.

“Firstly I would say getting minutes and winning silverware with the team was a blessing‚ and really exciting because‚ honestly‚ I didn’t think things would happen so quickly‚” the 20-year-old attacker said.

“And also putting in hard work throughout the sessions led me to get those minutes and I was happy to see myself winning the trophies in my first season.”

He earned a decent return in the second half of 2019-20 of five league appearances for the champions‚ and one more as a late substitute in the 1-0 Nedbank Cup final win against Bloemfontein Celtic. This made for two winners’ medals for the youngster in his first few months as a senior player.

Mkhuma admits he at first felt awkward around the senior players and star names he rubbed shoulders with in Sundowns’ first team.

“When it comes to the senior players it always has to start with respect and knowing when to play and when to work. In the beginning‚ it was not easy for me to be around the senior players but as time went on I started asking for guidance on and off the field‚” he said.

“They are not just senior players but my older brothers and I would say I [now] feel comfortable around them‚ most especially on the field. The technical team has also been there for me in order to help me to settle and not feel the pressure.

“In training sessions they take videos of the session and we are expected to collect those sessions so we can see our errors. Now I feel more comfortable to go and ask them for help so I can work on my weaknesses.

“I learn daily from the other players and technical staff because they show respect towards everyone – they instil the discipline and mostly love and leadership.

“They are not just coaches‚ fitness trainers‚ or physiotherapists. When I see one of them I see my teacher‚ uncle and father and I still want to learn more and win trophies.”

Mkhuma follows in the footsteps as a promoted attacker at Sundowns of the likes of Percy Tau and Sphelele Mkhulise.

Caps have been harder to come by so far in 2020-21‚ with just two in the league so far. A start in Downs’ second-last fixture before the break‚ a 1-1 away draw against Golden Arrows‚ seems to promise more game time for the youngster in 2021‚ where Mkhuma will also be out to catch the eye of SA U-23 coach David Notoane for a place in the Olympic squad that will compete at in Tokyo in July.