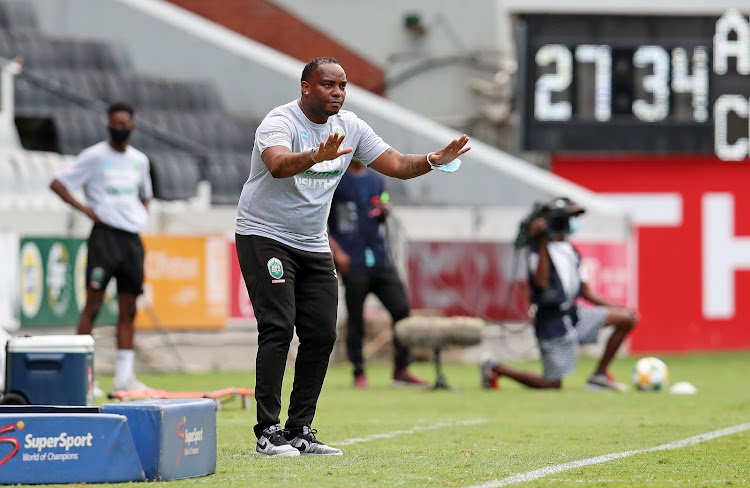 Benni McCarthy was on the bench for the first time as AmaZulu came from behind to win.
Image: Muzi Ntombela/BackpagePix

Benni McCarthy's regime at AmaZulu got off to a winning start after the Durban side came from behind to beat Eastern Cape's Chippa United at Kings Park stadium on Sunday afternoon.

McCarthy joined Usuthu a few days ago and will have been impressed by his new charges' fighting spirit after they recovered from an early Isaac Nhlapo goal in the 14th minute to beat the visitors 3-1 in a fast-paced league encounter.

AmaZulu never allowed the early Nhlapo setback to affect them and the home side's persistence was rewarded when Augustine Mulenga equalised after he was set up by an impressive Sphelele Mthembu in the 23rd minute.

Mthembu and Mulenga were involved in the buildup of the second goal and linked up superbly to set up Luvuyo Memela‚ who duly beat goalkeeper Ayanda Mtshali with a well-taken strike in the 29th minute.

The build up to the second goal will have pleased McCarthy as the AmaZulu players put together a string of impressive passes that bewildered the Port Elizabeth visitors‚ eventually ending up in the back of Mtshali's net.

Chippa coach Lehlohonolo Seema must have given his charges Alex Ferguson's infamous 'hairdryer treatment' during the break as they returned from the change room with more purpose and intent‚ keeping the home side on the backfoot in the opening minutes of the period.

They had two big opportunities early in the second half and with a bit of luck could have found the elusive equaliser that could have influenced a different outcome of the match.

Second half substitute Tebogo Qinisile should have brought the visitors level in the 54th minute but his shot at goal from a meter away was blocked by incredibly alert AmaZulu goalkeeper Siyabonga Mbatha.

The Durban side recovered from the scare and launched a quick counter that saw Mulenga turning provider to that man Memela‚ and he beat Mtshali with a cheeky back heel to increase the lead in the 55th minute.

The two sides continued to search for more goals but AmaZulu held on to ensure a winning start for McCarthy on his debut.

The 3-1 result will please AmaZulu owner Sandile Zungu as McCarthy appears to be ready to back up the promise he made when he was appointed a week ago.

Zungu splashed out on several new players in the beginning of the season and made it clear that he is targeting at top-four finish for the side.

But McCarthy‚ who replaced Ayanda Dlamini‚ said he has set his sights on finishing higher on the standings.

It was AmaZulu's first win in five matches and they will need to deliver similar results if they are to make the ambitious club owner happy.

Chippa coach Seema will have plenty to think about during the festive break as his charges have delivered some great performances at times in recent weeks but have very little to show for their trouble.