Allan Freese edging towards the exit door at AmaZulu 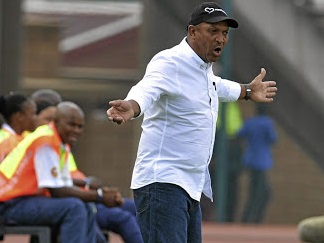 AmaZulu assistant coach Allan Freese appears to be on his way out of the club following the arrival of head coach Benni McCarthy.

Freese‚ who as in temporary charge during AmaZulu’s 2-0 loss to Golden Arrows in the KZN derby on Wednesday‚ will not be in the bench when Usuthu host Chippa United on Sunday at Kings Park Stadium.

“I have not yet left AmaZulu but I am not part of the technical team for the league match against Chippa United on Sunday‚” said Freese on Saturday.

Freese was put in temporary charge of the team after 36-year-old Ayanda Dlamini stepped down from his position as head coach only four months into his three-year contract early last week. “Any new coach will come with his own people and it is understandable. I am having a meeting with the General Manager (Tsepiso Mofokeng) on Saturday but definitely I will not be on the bench against Chippa United tomorrow.”

McCarthy is finalising his technical team that may include former Bafana Bafana team-mates in the form of Siyabonga Nomvethe and Moeneeb Josephs who have played for the club.

McCarthy was unveiled to much fanfare last week in Johannesburg by club chairman Sandile Zungu who is working on an ambitious plan to awaken the sleeping from its slumber.

McCarthy was an interested spectator on Wednesday night when Usuthu lost to Arrows where he followed the action from the stands with Zungu and Nomvethe.