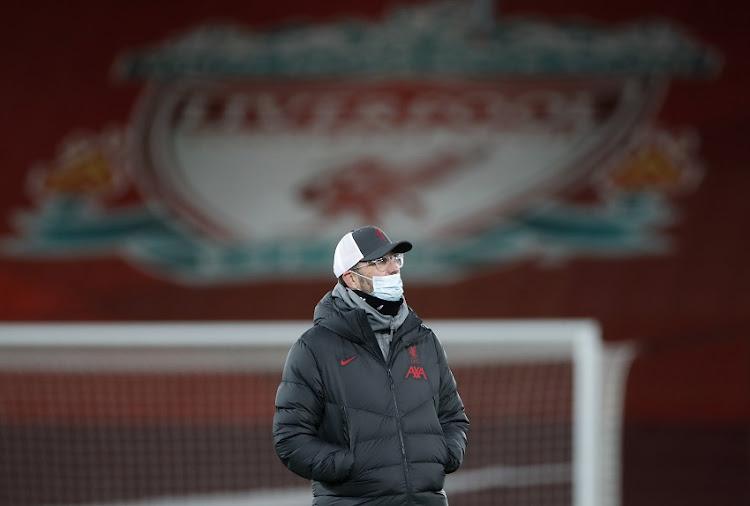 Jurgen Klopp, Manager of Liverpool wears a face mask as he looks on during the warm ups prior to the Premier League match between Liverpool and Tottenham Hotspur at Anfield on December 16, 2020 in Liverpool, England.
Image: Clive Brunskill/Getty Images

Liverpool boss Jurgen Klopp was once again left scratching his head after Premier League clubs voted once more against allowing five substitutes per side in each game, despite the condensed schedule.

The German, who was crowned by FIFA as the best coach in men's football on Thursday, has been a vocal critic of the league's reluctance to introduce the measure, which has been widely adopted the world over.

"I don't want to create headlines, everyone knows my opinion," Klopp told a news conference ahead of Saturday's trip to Crystal Palace.

"Pretty much only them voted against it in Europe, even the world, if I'm right.

"There must be a good reason for it. In all these leagues there's competition, every club wants to win the league or stay up. This is the only league - not even country, as the Championship decided to do it - who doesn't do it."

Champions Liverpool sit top of the Premier League on 28 points despite having won just once away from home this season, a run that includes a lacklustre 1-1 draw at Fulham last weekend.

Klopp, however, said he is not worried by his side's form on the road.

"It's not that much of a concern, or at least we didn't feel it," he said.

"We were slightly unlucky as well in one or two games, I'd say. It's a fact we didn't win a lot away from home but we try to change that by doing the right things again.

"Put another shift in, playing the best possible football is the plan both away and home."

Klopp, who could be missing up to eight first teamers through injury for the trip to London, said that midfielders Thiago Alcantara, James Milner and Xherdan Shaqiri were all close to resuming full training but would miss out on Saturday.