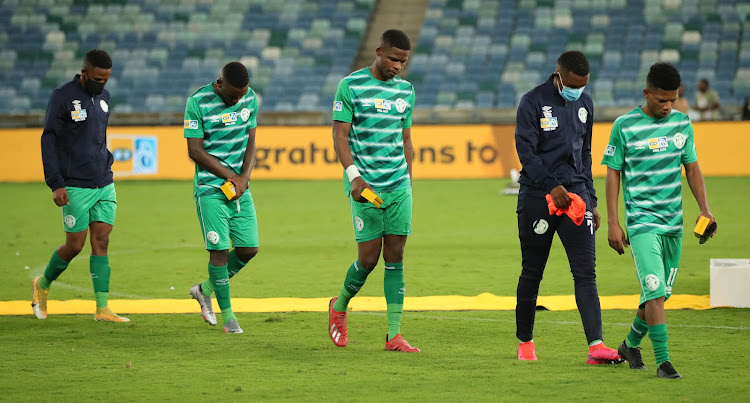 Bloemfontein Celtic players with their heads down after collecting their silver medals after losing the MTN8 final against Orlando Pirates in Durban on December 12 2020.
Image: Samuel Shivambu/BackpagePix

John Maduka has committed to lifting his players’ spirits after Bloemfontein Celtic lost a second cup final in a row within the space of a few weeks on Saturday.

Celtic were beaten 2-1 by Orlando Pirates at the Moses Mabhida stadium in Durban on Saturday night‚ with the defeat coming close after the Bloemfontein side's Nedbank Cup final heartbreak to Mamelodi Sundowns in September.

Maduka is well aware that he will need to pick up morale fast as the Free State side are 14th on the Premiership standings and in desperate need of the points that will move them away from the danger area.

They face a formidable side in Baroka FC at the Dr. Petrus Molemela stadium on Wednesday night and will need to put Saturday's disappointment behind them very quickly.

Maduka said it was upon himself to lift the team as he wants to start picking points in the DStv Premiership‚ where they’ve not been doing well‚ winning one‚ drawing one and losing three in their first five encounters.

“Performance-wise the boys did give their best‚” Maduka said of Saturday’s defeat in a game that could have gone either way.

“So we will try to motivate the guys. It’s not easy‚ especially because everyone wanted it so bad. It’s one of those things that when you want more sometimes it doesn’t work.

“It’s football‚ it’s one of those things and life has to go on.

“We can’t stop now‚ we’ve got to start and try to motivate them [the players]‚ bring them together so that we can start winning many games in the league.

“Life doesn’t stop because we lost in the final.

"Life has to keep on and we just need to motivate them and make them understand that this is football‚ and you won’t win all the time.

"At the end of the day if you’ve given your best like the players did [on Saturday]‚ how do you fight them? You can’t fight them you know.

"We lost the game but we lost to good opponents. It was not an easy game but we managed to compete.”

In September and in what was one of Maduka’s first few matches as Phunya Sele Sele head coach‚ Celtic lost 1-0 to Sundowns in the Nedbank Cup final.

If Celtic had won the Nedbank Cup and the MTN8‚ their long-running financial problems would have eased somewhat as they would have pocketed R15m.

After taking an early lead via Siphelele Luthuli’s early goal in Saturday’s final‚ it seemed as if Maduka’s team was on its way to winning their second top eight title.

The Bloemfontein side won the top eight for the first time in 2005 when Maduka was still a Celtic player and captain.

Maduka’s charges succumbed to Deon Hotto and Thembinkosi Lorch’s goals that gave the Buccaneers their first piece of silverware in six years.

The Malawian coach said it was going to be pointless for him to start blaming any player for Saturday’s defeat.

He preferred to turn his energy on preparing the team well for the coming league matches.

“Look‚ we are a team that wins as a team and we lose as team. It’s a game of mistakes. You can’t blame a player (Ronald Pfumbidzai conceded a penalty) because of a mistake

“We’re sure it was not his intentions to make a mistake‚ so he was trying maybe to do something‚ and before maybe making the mistake‚ maybe there was mistake somewhere.

“Look there were eight teams in the competition and we managed to go to the final. So it’s an achievement already for you to take the team in the final.

“Look at the teams (Sundowns and SuperSport) that we played against to make it to the final.”