Baby steps are over, coach says 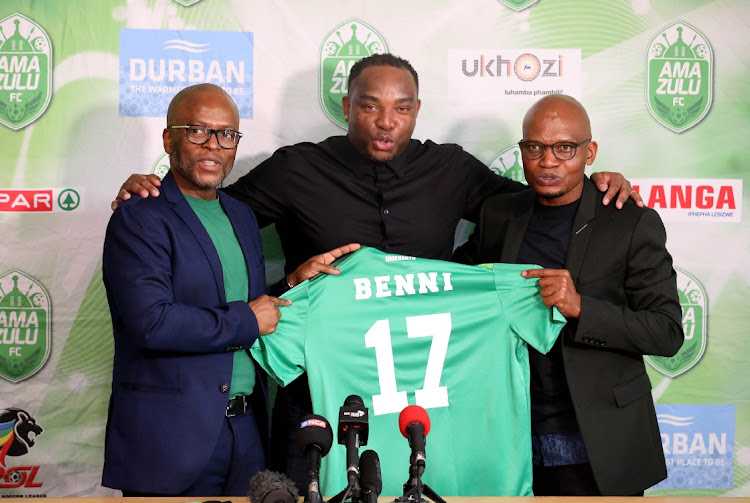 While AmaZulu chairman Sandile Zungu has reiterated his wish for a top-four finish this season, new coach Benni McCarthy has revealed that his ambitions are far more than that.

McCarthy, who was unveiled as Usuthu’s new coach in Johannesburg yesterday, said his goal was to challenge for the top spot, which he believed he could achieve with the squad they have assembled.

“The chairman wants the top four, but my ambitions are far more than the chairman’s. My baby years are over. I have done my baby steps,” McCarthy told the media yesterday.

“I learned how to walk when I coached at Cape Town City. Now I’m ready to race like Usain Bolt. I’m ready for the world champions 100m with the players that AmaZulu have. I can’t see why I can’t run that race or even aim for a top spot.

“I’m not arrogant about it, but I know what I can bring to the table, and I know if the players can give me the cooperation with the quality that they have, what I think we can achieve. I think this club can reach their target far quicker than expected.”

The 43-year-old returns to the Premier Soccer League for the first time after being sacked by Cape Town City in November last year, where he helped them win the MTN8 title two years ago.

He replaces Ayanda Dlamini, who has been redeployed to the club’s development ranks.

“I see so much potential. The signings that the chairman and the club have made show that the intentions are there,” McCarthy said.

“They want to compete. They don’t just want to fill the numbers. They want to be up there at the top.

“I think when I had my opportunity in my first job as a coach, I didn’t do badly, and I think we overachieved very much. What this club has in place is just for me to come in to get to know everybody else and try to get all the players on board.

“When I spoke to the chairman, he ticked all the boxes that I needed. For me, I think the super important success of the club comes with the groundwork.”

McCarthy added that he would like to bring his technical team but that the club will decide.

Meanwhile, the club also confirmed that assistant coach Allan Freese would be on the bench when Usuthu meet Golden Arrows in the KwaZulu-Natal derby at Kings Park Stadium tomorrow (5.30pm)

Ever thought what inspired some jersey numbers?

Not every football player has a deep connection with the jersey number he dons, but in most cases there’s a background story behind how the shirt ...
Sport
1 year ago

Ambitious Durban side AmaZulu named Benni McCarthy as their new coach on Monday.
Sport
1 year ago

Orlando Pirates coach Josef Zinnbauer has dedicated his first-ever trophy to his son Fabio after leading the Bucs to the MTN8 title at the weekend.
Sport
1 year ago
Next Article