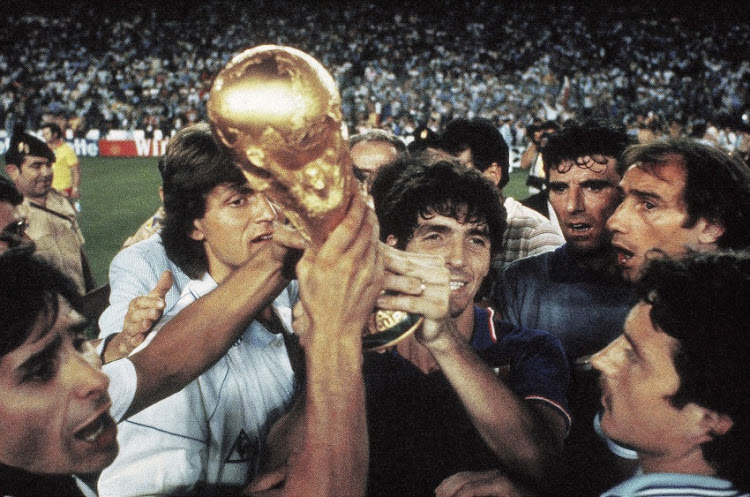 Paolo Rossi, Italy's goalscoring hero from their victorious 1982 World Cup campaign, has died at the age of 64.

The celebrated striker's death comes with the soccer world still in mourning for Argentina icon Diego Maradona, who passed away late last month.

Italian TV channel RAI Sport, where Rossi had been working as a pundit, said on Thursday "Pablito" had died of an "incurable disease".

"Unforgettable Pablito, who made all of us fall in love in that summer of 1982 and who was a precious and competent work colleague in RAI over recent years."

Rossi's wife, Federica Cappelletti, posted a photo of herself and her husband on Instagram along with the words "per sempre" - "forever".

Rossi won two Serie A titles, a European Cup and a Coppa Italia with Juventus but will be most fondly remembered for lighting up the 1982 World Cup in Spain with six goals.

His selection in the Italy squad came after a two-year ban for a match-fixing scandal and was initially criticised by pundits, who wrote him off as out of shape.

But they were left eating their words when he struck one of the World Cup's great hat-tricks against Brazil.

Italy's 3-2 victory in that classic encounter in the second group phase booked them a place in the semis against Poland, where Rossi again made the difference.

He sunk the Poles with a brace in a 2-0 win that fired his side into the World Cup decider against West Germany.

Rossi then scored Italy's first in a 3-1 victory that gave them their third World Cup title and their first since 1938.

He won the Golden Boot as the top scorer and Golden Ball as the player of the tournament, a campaign regarded as one of the best individual World Cup performances of all-time.

He was also awarded the 1982 Ballon d'Or as Europe's top footballer.

Born in Prato, Tuscany, Rossi played his entire club career in Italy. He was banned for three years in 1980 as part of the nation's infamous "Totonero" match-fixing scandal but always denied any wrongdoing.

The ban was later reduced to two years, allowing him to carve out his slice of World Cup history and win "personal redemption."

"On the other hand, I was disappointed that all of this just ended. The World Cup was over."

He also scored three goals at the 1978 World Cup in Argentina. With a total of nine goals, he remains Italy's joint highest scorer at the World Cup with Roberto Baggio and Christian Vieri.

Italians woke on Thursday to media eulogies for one of the country's favourite soccer sons.

Rossi was "the one who beat Zico's Brazil, Maradona's Argentina, Boniek's Poland and in the final, the Germany of Rummenigge," La Gazzetta dello Sport said on its website.