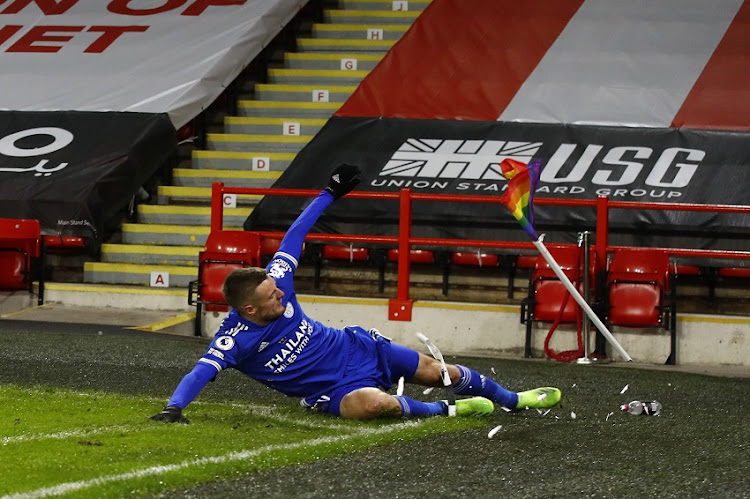 Jamie Vardy of Leicester City celebrates after scoring their team's second goal during the Premier League match between Sheffield United and Leicester City at Bramall Lane on December 06, 2020 in Sheffield, England. The match will be played without fans, behind closed doors as a Covid-19 precaution.
Image: Jason Cairnduff - Pool/Getty Images

Leicester City striker Jamie Vardy has written a message of support to the club's LGBT fans group, Foxes Pride, on the rainbow corner flag he shattered while celebrating his winner against Sheffield United on Sunday.

After his 90th minute goal gave Leicester a 2-1 Premier League win at Bramall Lane, Vardy ran to the corner and slid into the flag, which was carrying the Pride flag colours in celebration of a 'Rainbow Laces' campaign.

The England striker managed to get the broken flag back in the ground but was shown a yellow card by referee Stuart Attwell.

After images of the goal celebration went viral, Leicester's LGBT supporters group received a number of messages on Twitter saying Vardy's actions were a negative response to the campaign.

However, on Tuesday the group posted an image on Twitter  showing the snapped corner flag carrying the message: 'FOXES PRIDE - keep up the good work!' along with Vardy's signature.

"All at Foxes Pride have been saddened by LGBT-phobic comments online over the last few days after Vardy's corner flag goal celebration," the group tweeted.

"We are proud and grateful for the support that Vardy and Leicester City FC continue to show for Rainbow Laces, LGBT fans and Foxes Pride."