Bulls cement their position at top of Currie Cup 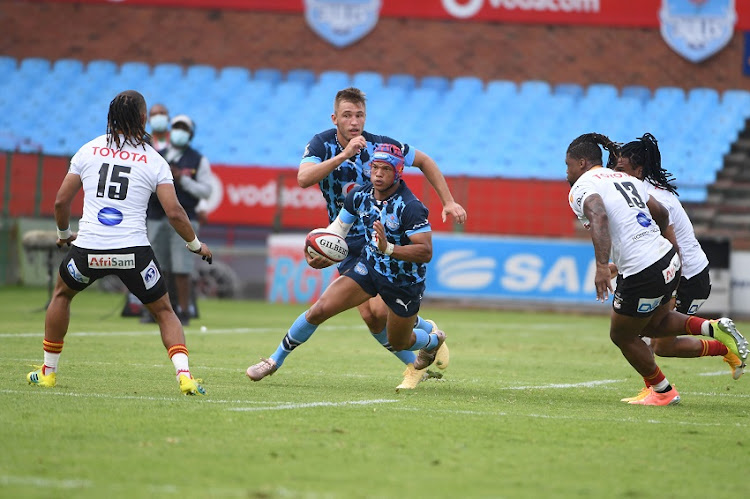 Kurt-Lee Arendse of the Bulls during the Carling Currie Cup match between Vodacom Bulls and Toyota Cheetahs at Loftus Versfeld on December 05, 2020 in Pretoria, South Africa.
Image: Lee Warren/Gallo Images

The Bulls cemented their position at the top of the Currie Cup log with an uninspiring, but workmanlike 40-13 bonus win against the Cheetahs at Loftus Versfeld.

For a game that had a fair bit of niggle considering how the Cheetahs had upset the Bulls’ applecart in Super Rugby Unlocked, the first half and most of the game was uninspiring fare.

The teams cancelled each other out with two contrasting, but well worked tries from Bulls scrumhalf Embrose Papier in the seventh minute and Cheetahs flyhalf Reinhardt Fortuin in the 36th minute.

Papier’s try, on the back of a fast start from the hosts, was a result of flowing movement that saw the Cheetahs falling short defensively on the left-hand side.

Fortuin’s try was a result of a stable scrum on the Bulls’ 5m line that the visitors did not waste. The rest of the points were collected by the opposing Steyns, Morne and Frans as the teams were tied at 13-all at the break.

They tried their best to inject life into the game, but for some reason, the combinations were not communicating.

Out-muscling each other became the name of the game in the second half, with the Bulls winning the first squeeze through a rolling maul try that flanker Marco van Staden was on the end of.

Van Staden completed his brace in the 78th minute to give the Bulls the bonus point.

The game again degenerated into physical nothingness, an example being a 57th minute Bulls scrum that led to a penalty that Morne Steyn converted.

A further Morne Steyn penalty in the 61st minute stretched the lead and the Bulls thought they had the game wrapped up when Cornal Hendricks scored a wonderful 66th minute try from a Morne Steyn chip.

It was disallowed as replays showed that Hendricks was ahead of the kicker.That didn’t matter when the Bulls’ replacement flyhalf Chris Smith started a movement; scored the try and converted it two minutes later.