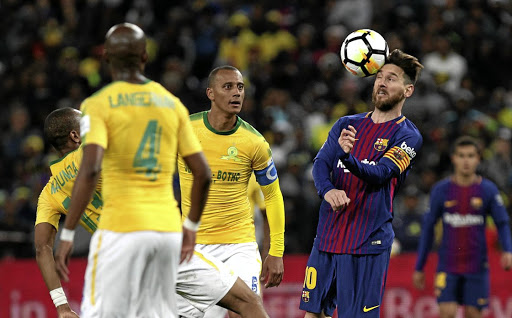 Barcelona's Lionel Messi heads the ball in front of Wayne Arendse of Downs during the Nelson Mandela Challenge at FNB.
Image: SANDILE NDLOVU

“Snoti”‚ as the 35-year-old Laffor was affectionately known by those who admired his skills and destructive ability‚ joined Sundowns in 2012 from SuperSport United and went on to make more than a 170 appearances and scored 30 goals.

Laffor is one of the most decorated players in the Premier Soccer League (PSL) with seven league titles‚ five with Sundowns and two with SuperSport‚ and he also won the Caf Champions League and the Caf Super Cup at Downs.

The 36-year-old Arendse also joined Sundowns in 2012 from relegated Santos. He went on to make 170 appearances and won five league titles‚ the Champions League and the Super Cup.

Sundowns announced they have also parted ways with attacker Katlego Otladisa who joined the club from now-defunct Platinum Stars in 2018 but struggled to nail down a place in the star studded Brazilians line-up.

“Mamelodi Sundowns would like to wish you all the best in your future endeavours and we are proud of the contribution you have given to the club. Laffor and Arendse are two of the most decorated players to ever grace the football field and wear the green and yellow‚” Sundowns’ statement read.

“There are countless moments we have shared with them over the years. A special thanks to the two Sundowns legends who have given their time and efforts to the club and have been part of Masandawana’s success over the years.”

As free agents‚ the three players will be in the hunt for contracts at new clubs.