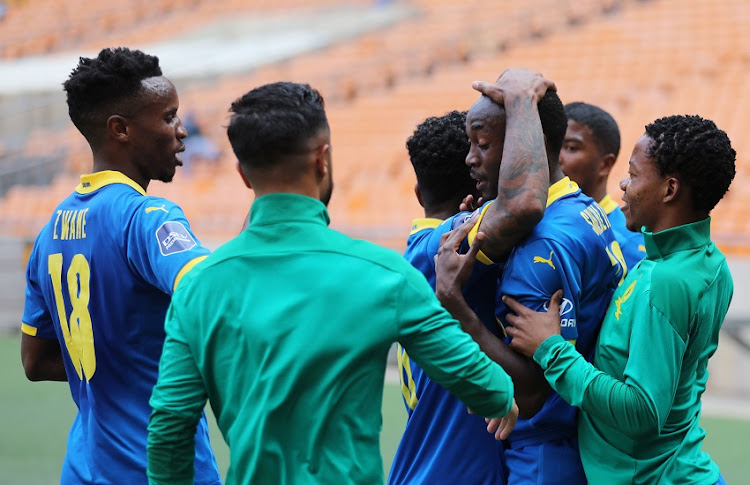 Mamelodi Sundowns are slowly putting the finishing touches on a new attacking partnership that has the potential to leave the opposition gasping for air once its full might is unleashed this season.

The Sundowns coaching trio of Manqoba Mngqithi‚ Steve Komphela and Rulani Mokwena have been molding Themba Zwane‚ Peter Shalulile and Kermit Erasmus into a devastating combination that has already delivered 10 league goals between them after just five matches.

Zwane has scored five goals‚ Shalulile has three while Erasmus has delivered two in a return that is reminiscent of the breathtakingly seamless collaboration between Leonardo Castro‚ Khama Billiat and Keagan Dolly that was known as the CBD during the days of Pitso Mosimane at the helm.

The famed CBD was notably supported by Percy Tau‚ who wrecked havoc in the league and on the continent as they spearheaded the Brazilians to the Caf Champions League title in 2016.

The three have also worked very hard in other areas of their game and this has excited the members of the Sundowns technical team.

“I said it before that one key trait that I like about them is that they have shared these goals. They have assisted one another‚ which shows brotherhood and does not show elements of selfishness.

"Brotherhood is more important because in as much they are all in competition and they are trying to score as many goals for themselves as possible‚ their relationship and selflessness are making it possible for us to keep climbing that ladder of success.

“I just hope and wish that we can maintain that level of selflessness because we have a lot of good players and we can be a little bit more prepared to work for one another. At times we are not all going to score but we must strive to consistently play for the team.”

Mngqithi added that there are other players waiting in the wings and itching to contribute to the team.

“One is encouraged but we know for a fact that they are still other players who are looking to coming in and doing something. Keletso (Makgalwa) is itching‚ Promise (Mkhuma) is itching‚ we have some very good boys.

"Lesedi Kapinga came on against Stellenbosch FC at the weekend and we were very impressed and Aubrey Modiba still has a little bit to work on.

"It is also interesting even with Lebo (Maboe) going back to number 8 position and playing the way he is playing. [We want to] have a team that has many players that are really giving something in the game both offensively and defensively."

“We also want to have a pool of a lot of players who can score goals and one is really impressed with how Mshishi (Zwane) has done.

"But it would be unfair for me to say that I am now expecting him to be the top scorer. Let’s just enjoy this movie and see where it is taking us because Kermit is coming strong‚ and he has already put a challenge on himself to score 30 this season. Peter is scoring almost every second or third game.”