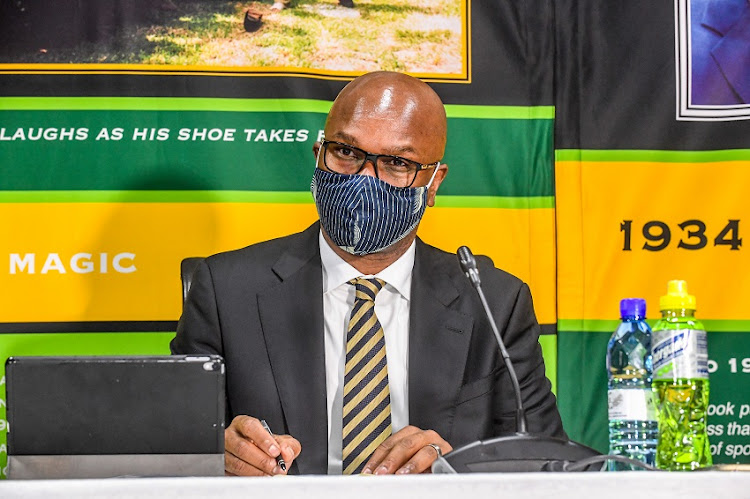 The Cape Town-born player died in a car crash on the N2 outside Mtunzini on the KwaZulu-Natal north coast last week and his funeral has been postponed as his mother is not well.

His sister‚ Siyasanga‚ fired a salvo at Mthethwa and provincial MEC Anroux Marais on social media on Wednesday and said the much loved player is being celebrated in Belgium‚ where he spent almost a decade with KRC Genk‚ while there's been very little recognition of the sacrifices he made for his country.

“It’s sad to see Anele Ngcongca’s life celebrated in Belgium and not in South Africa. Sport Minister has not made any contact with the family‚ MEC of CT has said nothing. The people of Gugulethu [in Cape Town] are disappointed. We as a family are disappointed.

“This man played for the World Cup and Bafana Bafana with 50 Caps‚ but there’s silence. @MbalulaFikile is the only Minister that came to meet the family‚” said Siyasanga.

Bhuti @robertmarawa it’s sad to see #AneleNgcongca life celebrated in Belgium and not in South Africa. Sport Min has not made any contact with the family ,MEC of Cpt has said nothing!The people of Gugulethu are disappointed. We as a family are disappointed.

Sports ministry spokesperson Masechaba Khumalo said they issued a condolences statement last week following Ngcongca's death‚ which is still on their website‚ and they will respond in further detail later on Wednesday.

Thabo Tutu‚ the director of sport promotion in the department of cultural affairs and sport in the Western Cape‚ said he has been contact with the family and represented MEC Marais.

“I was designated by the department to support the family.

Hi, @NathiMthethwaSA, with respect Sir and now that it's in the public space, kindly addresss this issue with the urgency it deserves as late and reactive as it might be.... A bereaved family of an SA sports icon of international repute feels your absence. Thank u. https://t.co/OONXx23luc

"I have been with the family where we discussed funeral arrangements and we also discussed the arrangements of the memorial service which happened (on Tuesday).

“On Tuesday I filed a submission for R40‚000 to go towards funeral arrangements and with regards to the minister and the MEC‚ they had planned to visit the family (on Wednesday) but unfortunately we heard at the memorial service that Anele’s mom is not well.

"We are resigned to meeting them next week because also the funeral has been postponed to next week.”

Sisi wami there's Nothing New there I'm so sorry to say just bereave as Family. Thus Minister is useless for the lack of a good Word. We as South Africans are with you and Family during this difficult times.

Mthethwa's own Twitter account continued to send out tweets on Wednesday without acknowledging Siyasanga or sportscaster Robert Marawa‚ who tweeted the minister directly.

Part of the statement issued by Mthethwa last week read: “The Department of Sport‚ Arts and Culture has learned with shock of the untimely passing of former Mamelodi Sundowns footballer and Amazulu Football club defender‚ Mr Anele Ngcongca.

His club in Belgium rested his jersey number. That's deep and meaningful respect from a country that values impact he made there. SA honestly is a shame, angazi mina benzani the ministers. Umbhedo nje into ovele ungazi uzoyithini. Phephisani Siya and family.

“This is indeed tragic news. Such amazing young talent uprooted at a time when he was at the peak of his career. His passing is not only a loss to football but also a loss to the entire sporting fraternity‚ as he was a disciplined South African ambassador‚ on and off the field.

Why am I not surprised!

"This talented footballer played a tremendous role in flying the South African flag high‚ especially in Europe where he plied most of his trade whilst representing the national team. I have been informed as well that at the time of his passing‚ he had just signed to another European team‚” Ngcongca's former club Mamelodi Sundowns have started a series of events to honour the likable and down-to-earth former Bafana defender‚ who was a firm favourite among the team's players and loved by rivals and supporters alike.

Sundowns and Stellenbosch paid tribute to the humble player on Saturday by warming up with T-shirts bearing his name and image. The match was temporarily stopped in the 16th minute by referee Jelly Chavani to honour him.

We have to sadly postpone Anele Ngcongca Funeral as uMama is not well. She expressed that the funeral cannot continue without her. We made the decision that her health is important as a family and postponed the funeral.
Details are on the poster below.@robertmarawa @Masandawana pic.twitter.com/08gX55Ud9l

The club decided to celebrate Ngcongca in 16 of their matches this season and the tribute started in their league game against Stellenbosch at the weekend.