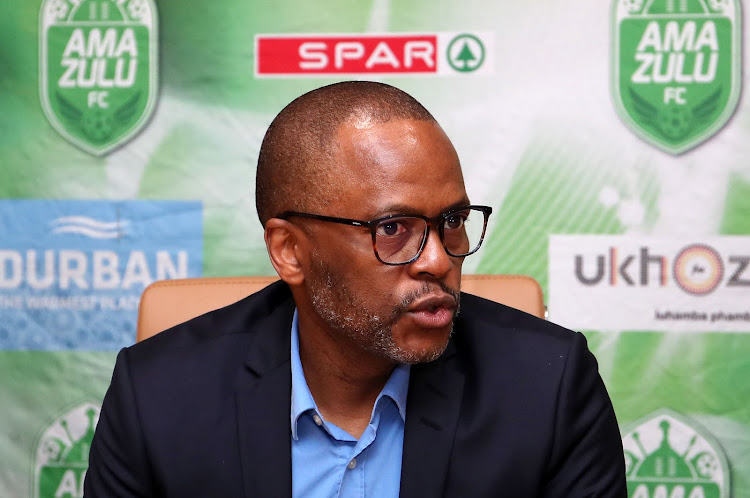 AmaZulu president and owner Sandile Zungu is demanding a top four finish in the Premiership in his first season in charge.
Image: Muzi Ntombela/BackpagePix

The club’s president said the signings this week of Phakamani Mahlambi on loan from Mamelodi Sundowns and goalkeeper Veli Mothwa outright from Chippa United – adding to the likes of Siphiwe Tshabalala‚ Xola Mlambo‚ and Luvuyo Memela – demonstrate Usuthu’s new regime are aiming high.

Mahlambi and Mothwa were presented to the media‚ along with new general manager Tsepiso Mofokeng‚ who has an LLB degree and has obtained 24 distinctions‚ in a press conference at the Zungu Investments’ upmarket head office in Bryanston. AmaZulu’s new owners made a display of something lacking in Durban teams in the Premier Soccer League era – ambition and structures.

No KZN team has challenged for the Premiership title since Manning Rangers won its inaugural 1996-97 season‚ and Usuthu’s last trophy came in the famous 3-1 defeat of Kaizer Chiefs in the 1992 Coca-Cola Cup final at FNB Stadium.

Zungu said the new owners are aiming to set that record straight.

“In our endeavour to rebuild AmaZulu Football Club there is just as important a focus on the administration as there is on the technical and playing department‚” he said.

“You will agree with me that adding these two very powerful names to the array of players we’ve signed recently‚ and add to that the pre-existing players whom we value‚ we can justly claim that we are a balanced team.

“ ... On the administration side‚ teams in KwaZulu-Natal historically have not reached their potential‚ and not because they did not have the players in the province.

“KwaZulu-Natal is the fountain of young talent in South Africa. They have never stayed at KZN clubs because the administration was found wanting.

“By making sure we have the highest calibre of managers we just want to demonstrate to the players that they matter.”

Zungu said ambition will be a buzzword at Usuthu under his ownership.

“I was worried about a month-and-a-half ago when the sale was announced that what I was saying could not be matched by actions‚” he said.

“But I thought it was important even at that time to outline our ambitions. And people said if we didn’t sign players we would be fighting relegation.

“We knew that we already had great players – they performed exceptionally well in the bubble‚ and we have confidence in them. But we needed bolstering‚ and who would question the quality of delivery and impact that those players have had on Usuthu already.

“Within a few matches Memela has entrenched himself as a player; [Augustine] Mulenga‚ Mzava‚ just to mention a few. And we still expect a lot from people like ‘Shabba’ [Tshabalala]‚ who was injured and will still get his chance.”

AmaZulu have had a solid league start in 2020-21 under coach Ayanda “Cobra” Dlamini‚ winning one‚ drawing two and losing two of five matches.