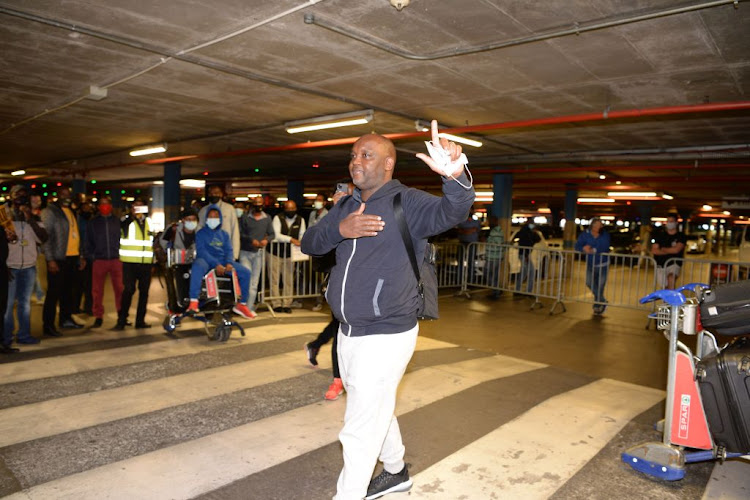 Pitso Mosimane's success in Egypt has been hailed as a boost for the SA coaching fraternity by Bafana Bafana coach Molefi Ntseki
Image: Lefty Shivambu/Gallo Images

Mosimane conquered the continent on Friday night with a technical team dominated by his SA compatriots — assistant coach Cavin Johnson, fitness trainer Kabelo Rangoaga and performance analyst Musi Matlaba — and Ntseki said the milestone would bring a lot of respect to the local coaching fraternity.

It was the second Champions League winners' medal for Mosimane after he led former club Mamelodi Sundowns to the same title in 2016.

“Firstly, congratulations to coach Pitso, his technical team and all the South Africans that have joined him in Egypt on his success story of winning the league, and now winning the Champions League,” said Ntseki.

“I think we’re very proud South Africans now that we have one of us having won the Champions League for the second time in two different countries, and with two different teams.

“I think it’s a huge milestone. It’s a journey that started years ago with SuperSport United with so much achievement.

“I think at times we tend to forget that your success begins when you start working towards it.

“I think with coach Pitso having empowered himself with the necessary tools, doing coaching courses, gaining experience and working with experienced coaches in the past and establishing himself as one of the best in the country and now on the continent, we can always adore him and wish him all the best of luck.”

Al Ahly beat their Cairo rivals Zamalek 2-1 at the Cairo International Stadium on Friday night in a match that enabled Mosimane to join the exclusive club of coaches who have won the Champions League with two different teams. The other two members of the exclusive club are Argentina’s Oscar Fullone and Egypt’s Mahmoud El-Gohary.

Ntseki said Mosimane’s triumph would serve as motivation to local coaches who harbour aspirations of furthering their careers in other parts of the continent.

“We’re proud to be South Africans and we’re proud to be SA coaches in this continent. I think it is up to us now to take the flag to the next level, to raise the bar in our continental competitions now that we’re still to qualify for Afcon (Africa Cup of Nations) 2022 and the 2022 Fifa World Cup.

“I think coach Pitso, coach Cavin Johnson [and] Kabelo Rangoaga have made history, and the history itself will make other nations and other countries respect SA football.

“I think it’s the biggest achievement in our lifetime and as SA coaches we’re very proud of his achievement.

“I see him doing very well going forward because of the passion that he’s got of the game of football and the professionalism that comes with it.”

Al Ahly, aptly named Team of the Century, had struggled for seven years to add to their eight Champions League titles and lost in the 2017 and 2018 finals.

Mosimane ended the drought and finally delivered the elusive ninth crown on Friday.

"We've witnessed history in the making".
Sport
6 months ago
Next Article