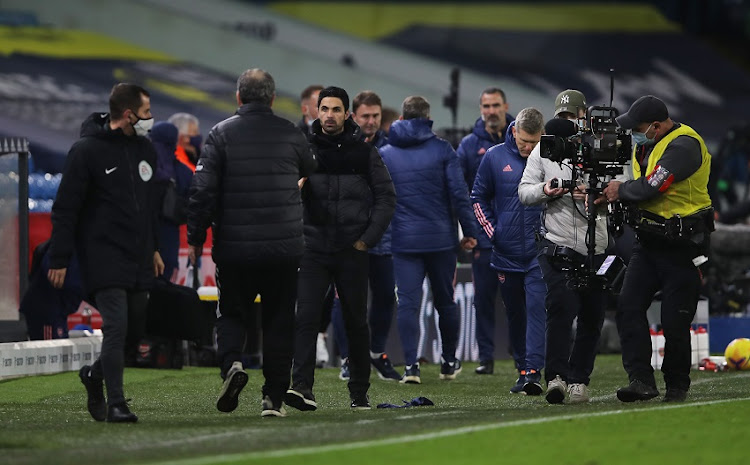 Marcelo Bielsa, Manager of Leeds United(2L) and Mikel Arteta, Manager of Arsenal(3L) embrace at the final whistle during the Premier League match between Leeds United and Arsenal at Elland Road on November 22, 2020 in Leeds, England.
Image: Molly Darlington - Pool/Getty Images

Leeds United manager Marcelo Bielsa said fans should not be allowed back into Premier League stadiums until all clubs had been given the green light for supporters to return.

With a month-long national lockdown to contain the spread of the novel coronavirus set to be lifted on Dec. 2, the government has said up to 4,000 fans can attend outdoor elite sports events in the lowest-risk medium alert areas of England.

Premier League clubs in London and Liverpool can welcome up to 2,000 fans as they fall under the high alert Tier 2 zone, but the Manchester teams and Leeds, who are classified as being in the very high alert Tier 3 zone, will have to wait longer.

"Perhaps there could be a rule that states that if fans are not allowed in all stadiums, then they should not be allowed in at all until everybody is allowed to have them in," Bielsa, whose side travel to Everton on Saturday, told reporters.

"It shouldn't be about the category, or the consequences of being in a category, it should be about trying to maintain the competition as equal as possible with things that are controllable.

"The presence of the fans has an effect on the results. What the organisation says is people who are from places where there's a higher risk of infection will be penalised."