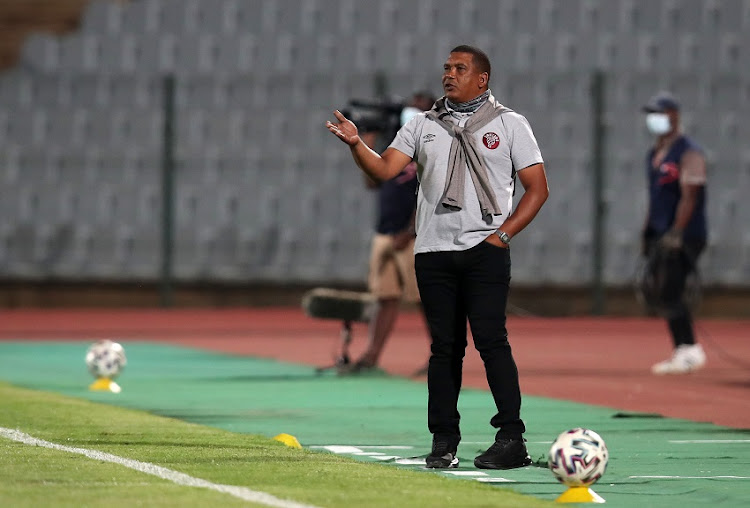 Swallows FC coach Brandon Truter says the Birds need to keep themselves grounded for now‚ and not get carried away with their prospects in the Premiership after a 1-0 win against Kaizer Chiefs on Tuesday night took them to five games unbeaten.

Truter said his promoted team – league leaders in the embryonic stage of the season – had been poor in the first half at Dobsonville Stadium‚ which he put down to nerves and excitement against glamour club Chiefs. He said they settled into a better rhythm in the second 45 minutes.

Substitute Joseph Mhlongo‚ the forward who has joined Swallows from Black Leopards‚ scored on debut in the 86th minute to earn the Birds three points after it appeared Chiefs had done enough to grind out a second tough away draw in succession.

“What an awful game. Shew – the first half‚ we were poor‚” Truter exclaimed after his team had won the first Swallows-Chiefs Soweto derby since the Birds’ relegation in 2015.

“I couldn’t remember when last – think it could have been last season – we had such a poor first half.

“But I think it was excitement. We played Chiefs‚ it’s our first game against them back in the PSL.

“Yes‚ we have some experienced boys‚ but‚ ja‚ it’s the excitement. It’s a new team and the excitement and anxiousness got the better of us in the first half.

“I managed to settle them down‚ calm them down‚ in the second half. And they really made themselves believe in themselves that they actually could go toe-to-toe.

“We forced a better structure‚ kept the ball a bit better. I think in the second half we were dominating. And that’s why they had to crack‚ the goal had to come.

“I’m just happy for Joe [Mhlongo]. After a long layoff‚ and injury after injury‚ he’s back now.

“Twenty minutes – that’s what we asked from him‚ and he gave us the goal.”

It was put to Truter that given a five-match unbeaten start – which includes three victories and now also the scalp of Chiefs – it seems clear that rookies Swallows can compete in the PSL.

“No. We will compete in the next game. I’m not looking at targets or where we will go in this league.

“We need to be humble. Yes‚ Chiefs are the biggest team in SA‚ but we need to calm the players down and we’ll take it game by game.”

Swallows’s next match is against Lamontville Golden Arrows – also unbeaten after their 2-2 draw against Chiefs in Durban at the weekend – at Sugar Ray Xulu Stadium on Saturday‚ December 5.

Chiefs‚ enduring a poor start to 2020-21‚ turn their attention to the Caf Champions League preliminary round this weekend‚ travelling on Thursday to meet Cameroon’s tournament rookies PWD Bamenda in Sunday’s first leg in Limbe.