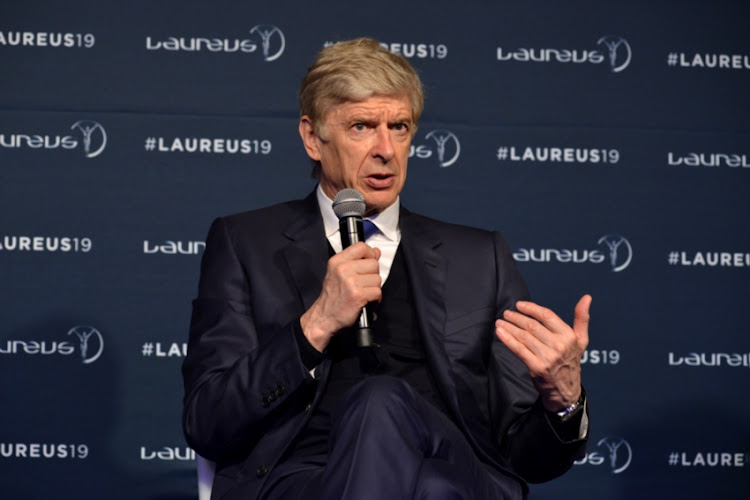 Arsene Wenger coached Arsenal to three league titles and also a major achievement with the side known as the Invincibles going an entire season unbeaten.
Image: Christian Alminana/Getty Images for Laureus

Arsene Wenger was at one stage close to signing a teenage Anele Ngcongca at Arsenal‚ the Bafana Bafana player’s one-time agent and youth coach Colin Gie has said.

Bafana’s 2010 World Cup right-back stalwart‚ one of South Africa’s most successful football exports in a career in Belgium‚ died aged 33 in a car accident on the N2 outside Mtunzini on the KwaZulu-Natal North Coast on Monday. Ngcongca was not the driver of the car.

Gie was the coach who spotted 13-year-old Gugulethu teen Ngcongca in a trial in 2001 for FC Fortune‚ the First Division club then associated to ex-Manchester United and Bafana midfielder Quinton Fortune.

Gie said he took 17-year-old Ngcongca to a trial with Arsenal in around 2005. Later‚ the right-back signed as a 19-year-old from FC Fortune for KRC Genk in Belgium.

“When I took him to Arsenal‚ it took Arsene Wenger and Thierry Henry minutes to assess Anele as a very good player – higher praise I cannot give‚” Gie said.

He said Arsenal’s intention was to sign Ngcongca – then not an international‚ so unable to earn a wok permit in England – and loan him to associate team KSK Beveren in Belgium.

“Unfortunately there was a bit of an issue with that club and the relationship with Arsenal broke down for whatever reason‚ and I had to find another avenue for him to get into Europe‚” Gie recalled.

“That’s when my good friend Hugo Broos was the manager at Genk‚ and that’s how I took Anele to Genk. I was sad he didn’t join Arsenal‚ but that’s life.”

In an interview with Sunday Times in March 2013‚ Ngcongca described his trial at Wynberg Military Base with 500 other hopefuls.

“Life wasn’t easy in the dust of Gugulethu‚ with a lot of gangsters around. My uncle found this article in the sports pages of a newspaper that Quinton Fortune was holding a trial‚ and they will try to do something with Man United‚” Ngcongca said then.

“He [his uncle] said: ‘Why not stop playing on the street and try your luck?’ I was so scared because I’d never been to trials. My mom said: ‘Go. If you fail‚ you fail and life goes on.’

“After the trial Mr Gie said I didn’t have to return the second day‚ I just had to bring my birth certificate and two photos‚ I was in the team. I was so excited that once I got out of the taxi from Wynberg I sprinted home — I couldn’t wait to tell my mom.”

Gie‚ the 1970s Highlands Park star and now director and coach of SAB League Cape Town United‚ said he recalled the story as‚ “similar to that‚ but not quite like that”.

“I still remember his trial very clearly‚” Gie said. “He stood out. He was certainly one of the finest young players I have ever scouted in my life – and I scouted Quinton Fortune and many others.”

Gie said for Ngcongca‚ making it in Europe was an avenue to helping his entire family out of dire financial circumstances and a tough life in Gugulethu.

“Yes‚ he came from a poor upbringing. It’s a very sad story‚ very similar to Quinton Fortune‚ which will be told‚” Gie said.

Ngcongca played for Genk from 2007 to 2015‚ winning the 2010-11 Jupiler Pro League and three cups. He played a season at Troyes in France’s Ligue 1 in 2015-16‚ then in four years at Mamelodi Sundowns won three more league titles and two cups.

The right-back was in KwaZulu-Natal to conclude a loan move from Sundowns to AmaZulu.